In 2003, Jay Birmingham, the second man to ever run from Badwater to Mt. Whitney, breaking Al Arnold’s record in the process in 1981, was inducted into the Badwater Hall of Fame during the 2003 Badwater 135 Pre-Race Meeting in Furnace Creek, CA.

The plaque presented to him by Chris Kostman – shown at the top of this page – reads:
Jay Birmingham is proudly inducted into the Badwater Hall of Fame
for making it a race in 1981 and again in 2003.

Jay subsequently completed the 2004 Badwater 135 – shown below – and has also completed both Badwater Cape Fear in 2018 and Badwater Salton Sea 267 VR Elite in 2021 (details). He also served on the Badwater 135 Application Review Committee for over 15 years. 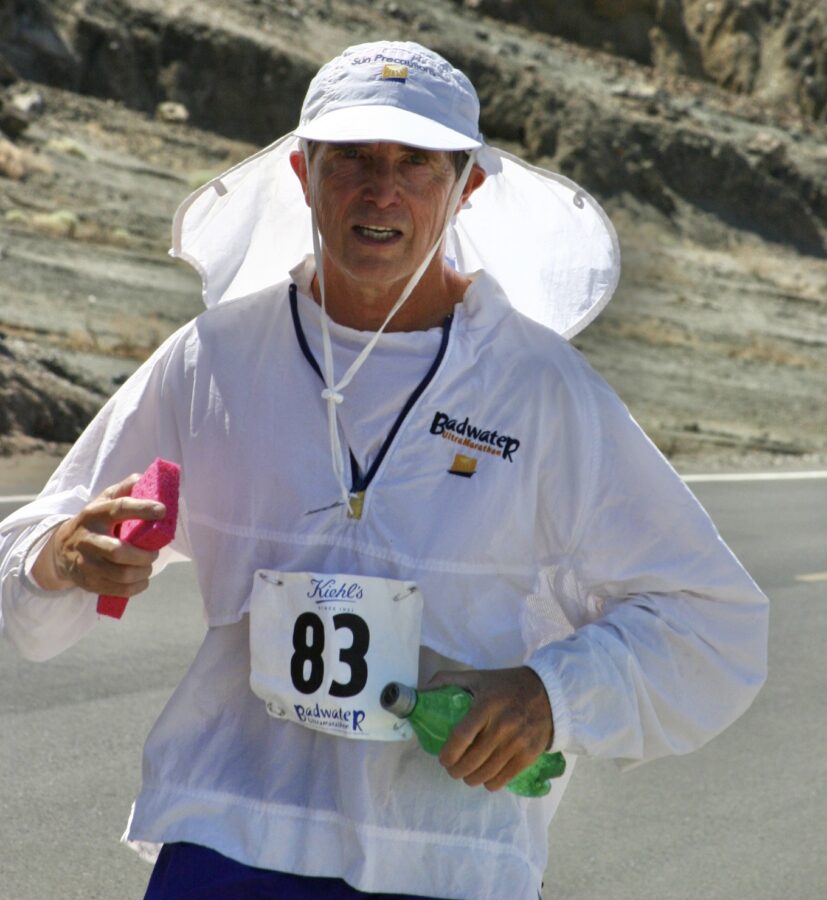 • To download and read Jay’s book, “The Longest Hill,” about his 1981 run from Badwater Basin to Mt. Whitney, click here.

• Read all our Jay Birmingham posts and stories on this website by clicking here. 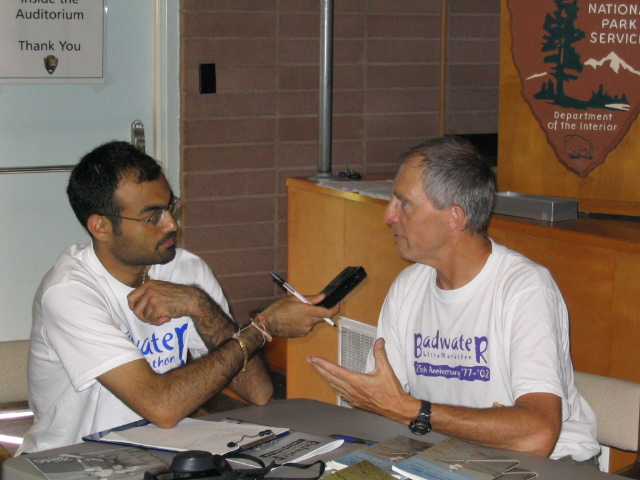 In 1981, 36-year old Jay Birmingham left Badwater, Death Valley, covered head to toe in a sun suit. He was set to run 146 miles. His wife and step-children were his support crew.

The temperature reached over 120 degrees in the mid-August heat as he ran from Badwater, the lowest point in the western hemisphere, to Mount Whitney, the highest point in the contiguous United States.

Birmingham was the fourth person to attempt the run and the second to finish. In 1977, Al Arnold became the first person to complete the feat, in over 84 hours. Birmingham ran it in 75 hours and 34 minutes.

This Tuesday morning, July 22, Birmingham will run the Badwater to Mt. Whitney route again for the first time in 22 years.

“It doesn’t take away anything from people who do it now, but I think it took maybe a slightly higher caliber person to do it when you have no support and no official race,” said Greg Minter, a two-time Badwater Ultramarathon entrant and finisher.

At Monday’s pre-race meeting, Birmingham was honored by race director Chris Kostman. He followed Al Arnold, becoming the second entrant in the Badwater Hall of Fame.

Birmingham also signed books for all 73 runners, then spoke to the runners, their crew and the media.

I spoke to Birmingham about coming back to Badwater, how he will approach Tuesday’s race, and what running has meant to him over the years.

Q: For the first time in 22 years, you are actively connected to this “feat” of humanity. What was it like to run “the feat” alone, in 1981, and now come back for the “the race”?

This is the first time I’ve been involved with “the race.”

After that 1980 experience, where I ran LA to New York, (Gary Morris and I) corresponded, maybe two exchanges of letters. He told me about his (Badwater attempt), and I got just kind of interested in maybe trying it. I had read about Al Arnold and now met somebody who actually tried it. Nobody really was the keeper of the record, except those of us who were long-distance runners. I never did get in touch with Al Arnold. I just didn’t know how to access him. Gary was my resource.

I worked out a plan that would break 80 hours. I didn’t want to go as hard as I could, because the thing that really made me think I could do it was Al Arnold said he didn’t stop the whole time.

I went with the conservative plan, which meant a full night’s sleep each night.

Q: Are you going to feel nostalgic, being out there, 22 years later? You haven’t been here, on actual trail itself, since 1981.

A: My approach is different, so I think it’s going to feel different. I’m going to intentionally being going a lot slower. I’m going to be on the road more hours a day. Hopefully 20 to 22 hours a day, instead of just trying to complete a segment and then going back to the hotel and resting.

It is a race, although I don’t have any real rigid plan to reach. I would like to do well.

Q: What goes through your mind when you’re running 120 degrees in the heat? (Race director Chris Kostman) was talking to a reporter about hallucinations, people who just get off the road and start crying, yelling at their crew, just not alert. What went through your mind 22 years ago and what do you expect now?

A: Twenty-two years ago, I really protected myself from getting in trouble. I was intimidated by the whole idea of running out here. I’m going to be a little slower than I was then. I don’t expect to get in trouble.

Q: What types of people run this race? Is there anyway to characterize them or would that just be inappropriate? Maybe for the layman, for the non-runner, how would you describe the people who run this?

A: I think there are at least three major categories of ultra runners or adventure runners. (First, there are) very talented, aggressive runners, who can run good marathons, probably run good 10-kilometer races. Then, there are people like myself who are not as talented, who want to challenge themselves, but have no chance of winning it, but nevertheless enjoy the satisfaction of completing a difficult task.

The Badwater Hall of Fame was created in 2002 with the induction of its first member, Al Arnold, who in 1977 became the first man to successfully run from Badwater to Mt. Whitney.

The 2002 Badwater Ultramarathon is proudly dedicated to AL ARNOLD
on the 25th anniversary of his record setting trek from Badwater to Mt. Whitney.  In recognition of his pioneering efforts, Al Arnold is also hereby and forever recognized as the first inductee into the Badwater Hall of Fame.

Read Al’s ongoing column here on the Badwater.com site at this link.