On March 21, 2015, AdventureCORPS, Inc. put on the BADWATER CAPE FEAR 50 Km and 51.4 Mile endurance runs, that were staged on Bald Head Island, NC, on approximately 10.5 miles of flat roads touring the southern sections of the island, 1.5 miles of narrow single track trail through a dense and scenic forest preserve, finally ending with 19 to 38 miles on sand from Cape Fear to Fort Fisher and return. The start line was at Old Baldy Lighthouse near the ferry terminal while the finish line was at Cape Fear. Adding in a few connecting sections the route covered 32 or 51.4 miles. A cut off time of 9 hours was in force for the 50 Km event, an intermediate cutoff of 8 hours at 50 Km and 14 hour overall cut off for the 51.4 mile race.

There were three well stocked aid stations located at the finish line, one half-way between Cape Fear and Ft. Fisher and another at the turn-around located at the Ft. Fisher Ranger Station that kept the runners fueled and satiated with a wide variety of hot and cold food excellently prepared by the chef of Maritime Market. Also available and greatly appreciate were electrolytes, Hammer gels, sunscreen and minor first aid supplies. Drop bags could be left at Cape Fear and / or Ft. Fisher. The weather was ideal with a starting temperature in the low 50s, low 60s for a high temp and clearing skies after the early maritime layer burned off. The winds were generally light with a moderate afternoon sea breeze that connived to give me a headwind both out and back on the final Cape Fear to Ft. Fisher section.

The social opportunities offered by BADWATER CAPE FEAR were important and very enjoyable as well. Most participants shared houses on the island to avoid the inconvenience and cost of multiple ferry rides from the mainland, so many new friendships were forged. The Facebook event page made it a relative simple process to locate roommates. The Friday night social mixer, hosted by Coastal Urge, was well attended and a lot of fun, an easy way to meet Facebook friends in person. Complimentary Natty Greene’s IPA and Ale were appreciated by many of the runners.

After the hard Saturday on the sand was endured (pleasantly as the scenery was exquisite) the Sunday morning buffet breakfast was also a huge hit. Eggs, bacon, sausage, potatoes and coffee were plentiful and delicious. Indeed, after a 3-day weekend as provided by BADWATER CAPE FEAR, a painful reentry followed as one returned home to their own “real world” of responsibilities. Fortunately the memories last forever and planning commences for next year’s BADWATER CAPE FEAR to be held the weekend of 19th March 2016; registration is now open at Badwater.com.

As most participants at BADWATER CAPE FEAR do, I shared housing with other runners to save on lodging costs, plus split the costs of groceries and craft beers. I have known Bradford Lombardi for a number of years, are great friends, shared lodging many times and know we are compatible. Using the BADWATER CAPE FEAR Facebook event page we tracked down our roommates Keith Hanson, Laura Mudge, Tim Finholm and Jenni Hollenbeck. Bradford and Keith both are sponsored by Skins, so they knew each other already. Myself, I only knew Bradford. We all exchanged social media handles and mobile phone numbers and agreed to meet Friday afternoon at our rental house, then attend race check-in and the Friday night social.

I flew in a day early, stayed in Southport for convenience, and, after dropping off a Ft. Fisher drop bag at the Hampton Inn, I caught the ferry over to Bald Head Island. By chance, Keith and Laura were on the ferry, too, so we met up on arrival at Bald Head Island. Bradford was already at the house while Tim and Jenni were en route. By a stroke of luck, our original rental was occupied so we were transferred at no additional cost to a beachfront location! The views were stunning, the setting charming and, as we relaxed on the deck with a cold beer, I could feel what Bald Head Island was all about: Peace, Tranquility, Not a care in the world, except of course a 51.4 Mile run looming the next morning!

After check-in, we all attended the Friday night social mixer graciously hosted by Jeoffrey Nathan, Co-owner of Coastal Urge. The IPAs and Ales were supplied by Natty Greene’s, one of 126 craft breweries in North Carolina. Being careful with our consumption, we chatted with friends a few hours, then made our way back in the dark to our rental house, not without incident as our electric cart battery died a mile short! Bradford jogged back to retrieve our spare cart and we were able to careful ease the dead battery cart back to the house, giggling all the way at our misfortune. Later we found that we only had a partial charge as the former tenants moved out a bit late. With the ultra-run looming, we all crashed early and slept soundly. 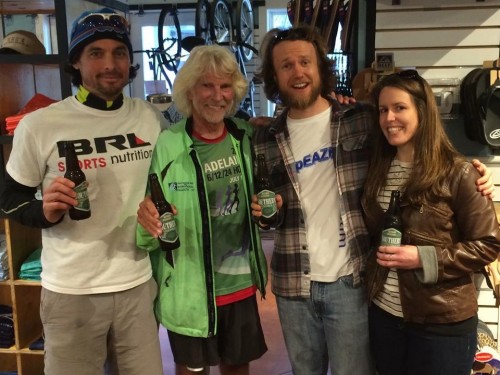 Friday night social mixer hosted by Coastal Urge was a big hit with the runners, their friends and families. From left: Bradford Lombardi, Jim Schroeder, Keith Hanson and Laura Mudge.

Arriving at the Old Baldy Start Line we all were very excited to get underway. The morning chill kept us moving at all times except for the numerous “photo ops” taking place. AdventureCORPS is known for its efficiency and rigorous adherence to a time schedule. Finally we were off for the initial 10.5 mile road segment! Frankly, I was worrying about the 39 mile segment on the sand, but I tried to relax and not start out too fast. 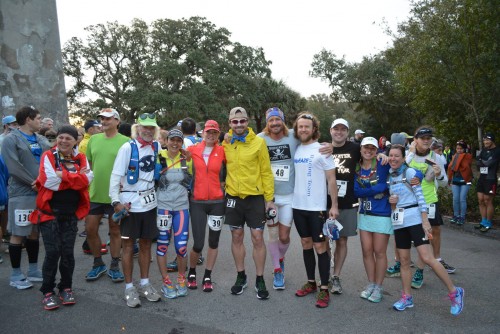 I live along the Atlantic Ocean on a barrier island just off Melbourne, FL and run most every morning on the beach. This I assumed would give me a leg up in trying to better my age group competition against Bob “Badwater” Becker and others. I would be wrong. Bob and I see-sawed through the first 46 miles. As Bob said one time as he passed me yet again, “Like a bad penny, I keep coming back!” At the mile 45.77 Checkpoint 10, I was out of water and food so I needed to cross the deep sand and pull in for a refill. I turned around to say something to Bob only to see that he was still running on the firm sand bypassing CP 10 and appeared to be picking his pace up. I knew what he was up to of course, putting some distance on me, when he spied the opportunity! With just over 5 miles left I tried in vain to catch up, but I could not close the distance. Bob finished in 11:20 with me 9 minutes behind at 11:29. That was a lot of fun and Bob was waiting at the finish line, the first to congratulate me on my finish on a tough course. Also waiting for me, cold IPA in hand for my pleasure, were Bradford, Keith, Laura, Tim and Jenni! I could not have been more pleased! All my roommates turned in impressive performances as can be seen on the results link. 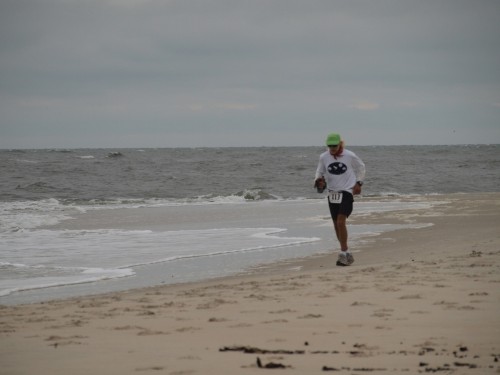 Jim Schroeder Grinding it out on the Sands of Bald Head Island. Photo by Chris Kostman, AdventureCORPS Founder and Race Director.

On the course I saw at least 14 or so friends from Florida who flew up together from the Ft. Lauderdale area. See Jodi Weiss’ excellent race report to savor all of their experiences! Naturally I saw numerous other ultra friends from around the US. As always, AdventureCORPS brings the family together and makes the reunion happen! 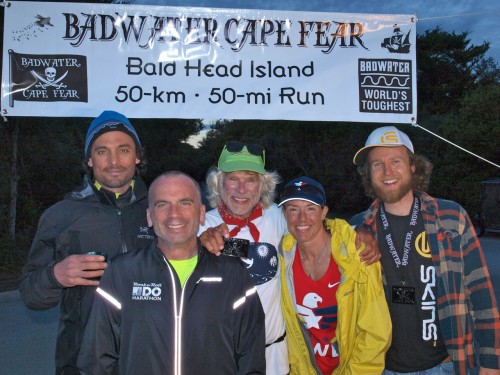 I witnessed some very impressive running on the BADWATER CAPE FEAR course! The state of Wisconsin presented us with three top finishing runners in the 51.4 mile race. It must have been the relief from their record long cold winter that spurred them on!

The results for all events can be viewed online here.

Not surprisingly, Saturday night was quiet and we all retired early. We planned an early ferry after the Sunday breakfast buffet preparing to say our goodbyes. The weather was changing with rain forecast later that day. The ferry ride was scenic of course, but also rather special in a surprising way. The South Floridians remembered that it was Bradford’s birthday and organized a rousing version of “Happy Birthday” on the ferry. That would be the first time I’ve seen Bradford speechless! And blushing slightly. What a hoot. I expect Bob Becker was behind it all, but I cannot be sure.

A hearty thank you goes to Chris Kostman, AdventureCORPS, Inc. Founder, CEO, Chief Adventure Officer and Race Director, Laurie Streff Kostman, and all of the enthusiastic volunteers and ultra-runners, for a fantastic ultra- running experience. I will see many of you, my ultra running family, at the upcoming BADWATER events this year.