– Some History and Context about “Outlier” Performances
For the past 23 years, it has been my great pleasure to lead the team which hosts the Badwater 135 Ultramarathon. Since our very first race in 2000, Badwater 135 runners have been giving amazing – and sometimes astonishing – performances on the race course. Human potential is truly incredible and we love providing the venue and opportunity for women and men to redefine what is possible.
For the first 13 editions of the race, there was very little International participation. It was mostly Americans, Brits, and other English speakers. The field was normally 12 to 25 runners (with 42 in 1999, the last year under the original leadership of the race.)
When I took the event over in 2000, my vision was that Badwater 135 would intentionally welcome runners carrying flags from across the globe, as well as endurance athletes with all kinds of varying backgrounds. We encouraged and embraced not only all the ultra runners who wanted to participate, but also ultra triathletes, mountaineers, and ultra cyclists, as long as they met the qualifying criteria and were selected to race. My goal was and remains to make Badwater 135 as competitive, as interesting, as diverse, and as international as possible.
We instantly began to achieve that goal at our first race in 2000, when the top five finishers came from Russia, Slovenia, Japan, Russia, and Russia, in that order. The Badwater veterans learned they had been “big fish in a small pond” when the men’s and women’s records were broken, with the Russian men’s winner five hours ahead of the lead American and the Russian women’s winner over 11 hours ahead of the next woman. It was a wake-up call to the nearly entirely American race field that there was a much wider body of ultra athletes out there capable of excelling at this race. But they weren’t only foreigners.
Just two years later, in 2002, a woman won the race overall: Pam Reed of Tucson, Arizona took first overall with an astonishing gap of over four hours and forty minutes ahead of the next runner, the first man (27:56:47 versus 32:38:57.) She was over nine hours ahead of the next woman.
In 2002, Pam had started in the first wave and ran away from the whole race field immediately. She came back in 2003, started in the third wave, and won again. This time Dean Karnazes finished 24 minutes behind her, but the next finisher – the 2nd woman – was over five hours back. (The following year, Reed took fourth while Karnazes won with a four-hour margin over Reed, but just eight minutes over 2nd place.)
In 2005, Scott Jurek won the race in his rookie debut in a time of 24:36:08. He was arguably the greatest male American ultra runner at the time, but what made his win startling was that it came just one weekend after his seventh – and final – Western States 100 win. That is some amazing recovery. (The following year he dedicated his season to training for Badwater 135, and did all the right things in terms of heat training, road training, and such; he won again, but in a slower time.)
In 2006, David Goggins entered for the first time. He is a very muscular, large man, and he had extremely limited running experience, basically just one 24-hour race plus the HURT 100. (In real life, he was a Navy SEAL and has phenomenal overall fitness and strength.) In his rookie debut, he placed fifth in 30:18:54, coming in behind four of the biggest names in ultra running at the time: Scott Jurek, Akos Konya, Charlie Engle, and Ferg Hawke. He was also three hours ahead of Dean Karnazes.
In 2007, Goggins finished in third place with a time of 25:49:40, behind new course record breaker Valmir Nunes and runner-up (again) Akos Konya, something nobody would have predicted given Goggins’ physique and his limited running background.
In 2007, Jamie Donaldson took over 41 hours during her rookie debut, but then she returned in 2008 to win in a time of 26:51:33, a shocking 17 hour improvement and a new women’s record. She won three years in a row and broke her own women’s record in 2010 with a 25:53:07. (She then retired from the sport.)
In 2012, 70-year-old Arthur Webb completed the race in 33:45:40, setting a still unbroken 70+ age group record. Webb had started competing in Badwater 135 at age 56; it was this 15th consecutive race in 2012 when he not only set his amazing 70+ record, but also set his fastest personal record. He placed 29th out of 96; the average age of the runners ahead of him was 43.7 and the oldest ahead of him was just 60.
In 2013, a “previously unknown” 49-year-old Australian named Grant Maughan entered the race and placed second, just 15 minutes behind the winner, in 24:53:57. (He would take second again the following year, and eventually finish seven times.)
In 2015, Pete Kostelnick entered for the second time. He had run an impressive 30:38:09 in his rookie debut in 2014, but just one year later he ran 23:27:10 – an astonishing improvement of over seven hours. A year later, in 2016, he broke Valmir Nunes’ nine-year-old men’s record with a time of 21:56:32. (Since then, Pete has finished seven hours slower, thirteen hours slower, and DNF’d twice. But during Pete’s slowest Badwater 135, he ran from Lone Pine to the Whitney Portal finish line faster than anyone before or since: 2:21 for the 13 miles 5000 feet of ascent.)
In 2019, both course records were broken by rookie entrants. Yoshihiko Ishikawa of Japan set a new men’s record of 21:33:01, finishing 2 hours and 40 minutes ahead of the 2nd place finisher – and new women’s record breaker – Patricyja Bereznowska of Poland. Bereznowska broke Jamie Donaldson’s 2010 women’s record by 23 minutes and was the first woman to finish on the podium (top three overall) since 2010 and the first woman to ever place second overall. Nearly five hours behind Ishikawa and two hours behind Bereznowska was the third finisher, and second man, American Harvey Lewis in 26:11:18.
In 2022, the women’s course record fell as Ashley Paulson, a professional triathlete with six ultramarathon wins, ran just under four minutes faster than Bereznowska two years prior, and also placed third overall. 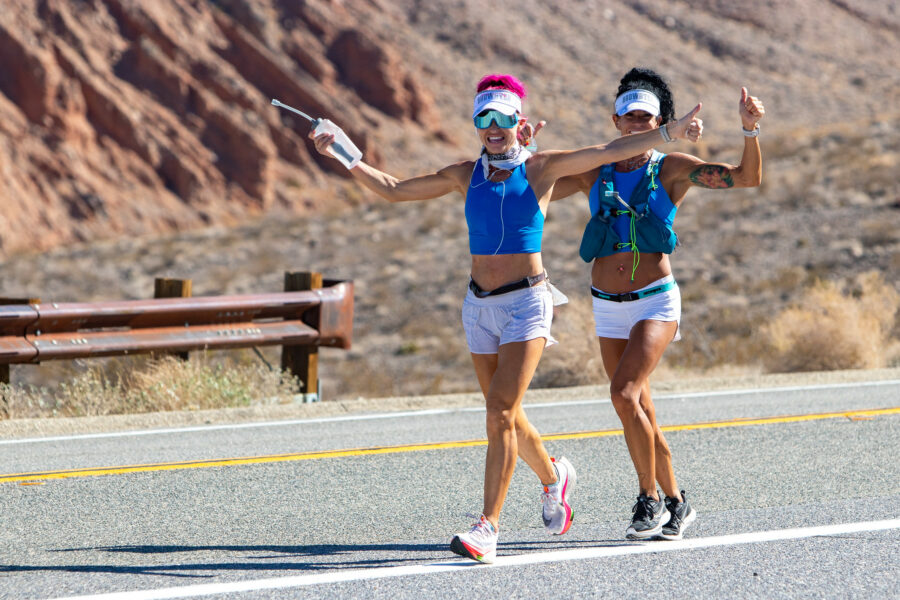 Ashley Paulson and pacer descend Towne Pass into the Panamint Valley during the 2022 Badwater 135. 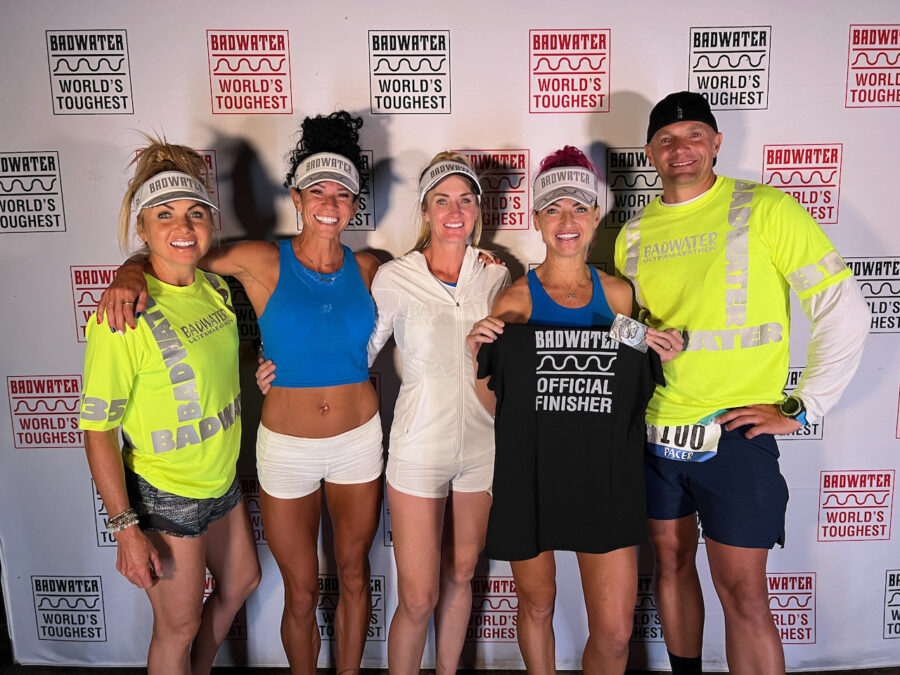