Dear Chris,
I decided that you have to know about this. A few days after my return from my participation in the Badwater Ultramarathon, I received a large envelope in the mail. My wife, Laurel, opened it and started to cry. I could not believe that a class of children in Syracuse, NY, near where I live, completed a project on the California deserts. They sent me a 3 ring binder that has 29 letters to me from the students congratulating me on my race. They had followed the website and race closely. In so doing, they learned about computers, the deserts, and one very amazing athletic event. Attached are some examples of their work. 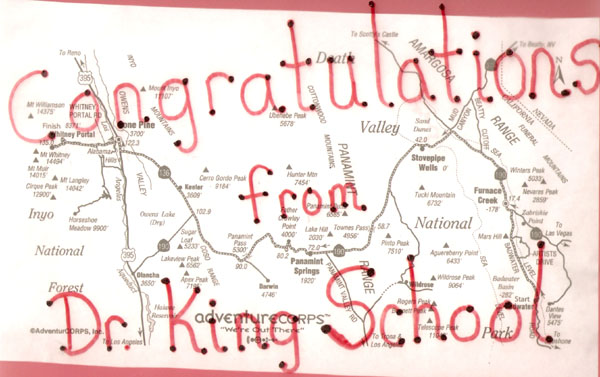 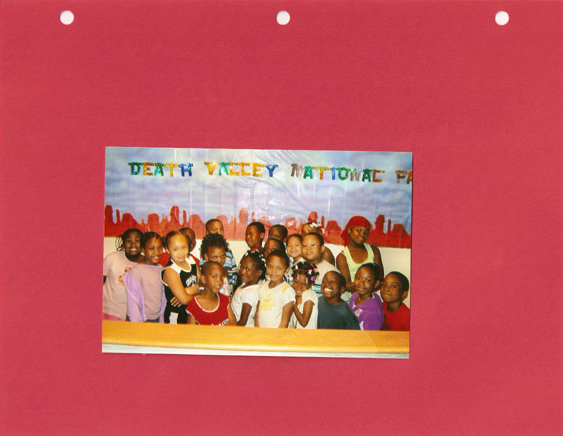 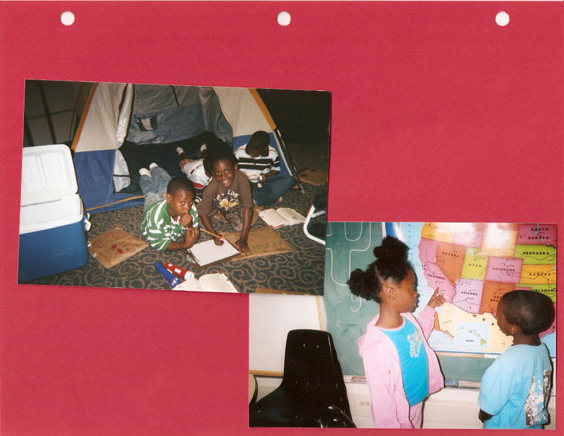 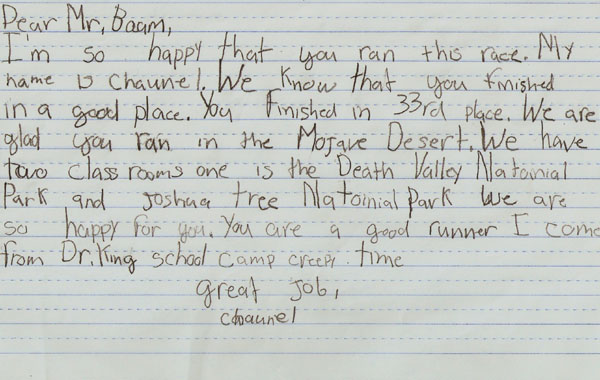 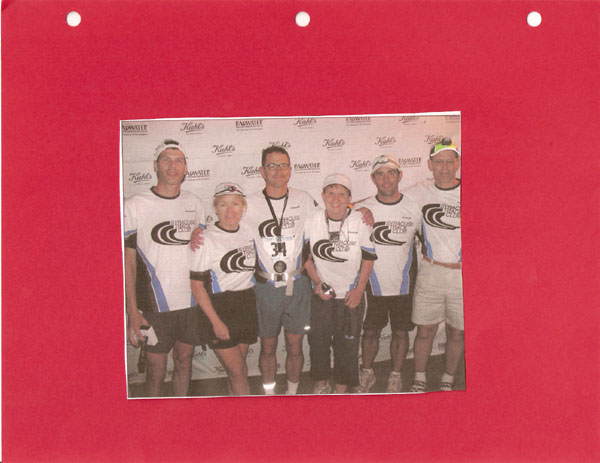 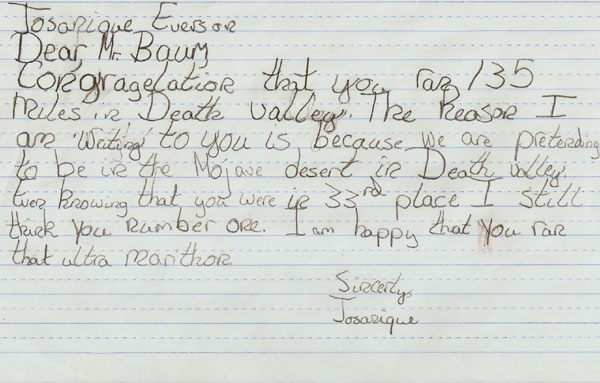 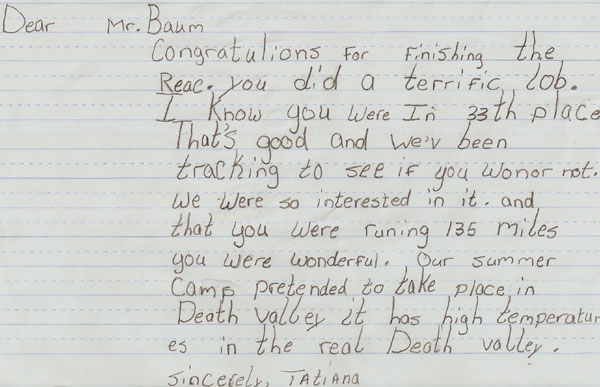 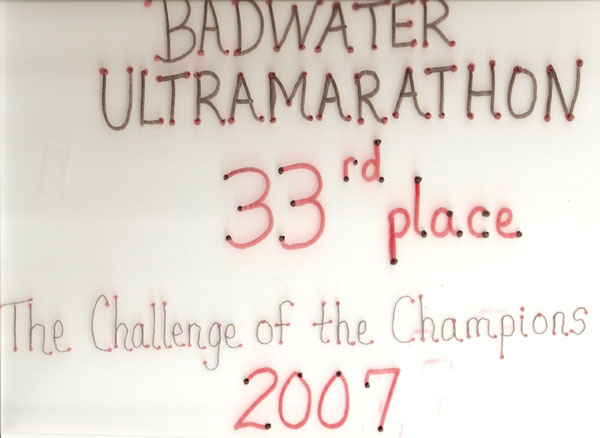 On September 24, 2007, Todd Baum and his wife visited the Dr. King School. They brought Badwater Ultramarathon hats for all the kids, plus race magazines and DVDs for the teachers. Here is the report by journalist Amber Smith from the local newspaper:

Syracuse school children, enrolled in a summer camp at Dr. King School, were reading Gina Gershon’s “Camp Creepy Time” this summer. It’s set in the Mojave Desert When their teacher, Pam Angotti saw an article in The Post-Standard about Fayetteville nurse Todd Baum preparing to run 135 miles through the desert, she incorporated his undertaking into her lesson plan.

When he returned from the Badwater Ultramarathon, Baum received a packet in the mail of notes the students wrote, bound together in a notebook with pictures they printed from the Internet. It touched him.

Monday, he met with the students at the end of the school day. About 30 third- and fourth-graders gathered to hear about Baum’s adventure. He passed around the hats he wore, the medal and belt buckle he won. He answered their questions.

One student wondered why he wore shorts instead of pants. Baum explained that he wore long white pants when it was sunny, to protect himself from sunburn, and then switched to shorts as the sun set.

Another student asked if he saw any animals along the way. Baum mentioned crows, a group that assembled in the shade, their beaks gaping open as if trying to stay cool. His wife, Laurel, part of his support group, told about the coyotes and roadrunners.

Dear Chris,
I wish you were there yesterday. You would have been proud of those students and teachers. All the children in the summer literacy program were let out of their respective classes and came together in an open class with a TV/DVD player. The students sat around on the carpeted floor. I think they are in the 3rd grade. I spoke and explained how the finisher’s metal and belt buckle were wonderful awards, but it was their project and letters that really captured my heart, and I thanked them.

I explained that you, Mr. Kostman, were also very happy to see the work they did. I explained that the Mojave Desert and the Badwater Ultramarathon are very important to you, and that you are very happy to see them, the students, learning about the deserts and the race. I went on to say that the runners are not the only participants in the race, that each runner has a crew, and that they, the students, were also participants in the race since they learned so much and came to appreciate what a special place the desert can be. I told them you had sent them gifts. It was really an exciting time.

We watched the 2006 Badwater Party film clip that you sent, and then I took about 100 questions. The kids passed around and tried on my Sun Protection clothing and hats. I also gave them the race magazines and several 8.5 x 11 pictures of the race. Every student was African-American and they were especially interested in Mr. Goggins. They all giggled when they saw him running in the film clip. The desert, the race, and the athletes blow away many paradigms, don’t they?

I gave the DVD to the teachers and encouraged them to consider the same theme for next summer’s program. Your gifts, the hats, were given to the students. It meant a lot to them. We said our thank yous and good-byes. I met many teachers, even the principal came to introduce herself. Pam Angotti, the teacher, along with Amber Smith, Health and Fitness editor of the Post Standard, my wife Laurel, and I went to the school cafeteria. A large board was on display with many pictures from the summer program which was called Camp Creepy Time (see below). When I went to my car, I saw the children walking home with their hats on. 30 children were walking toward South Salina Street, or were they?

Camp Creepy Time is the book that the students read in the literacy program. It is set in the Mojave Desert. The children were divided into different “camping grounds.” Death Valley and Joshua Tree were two of them. The classrooms had tents, sleeping bags, coolers, maps etc. Just as things were getting started last year, Pam read about me in the paper. Well, the curriculum adopted the Badwater Ultramarathon and now you see the result. 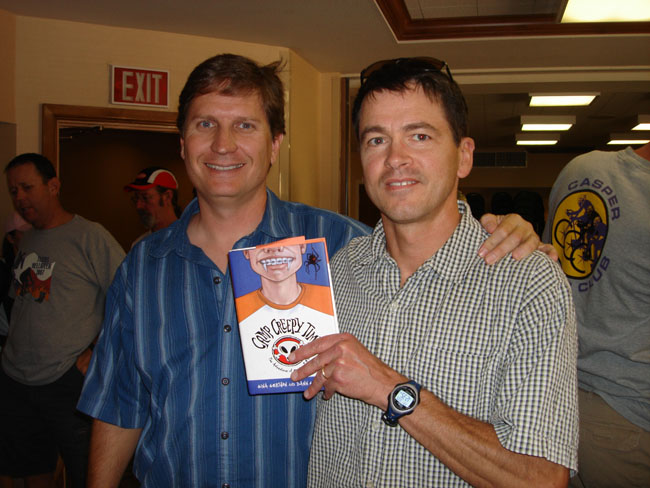 Above: Todd participated in the 2007 Furnace Creek 508 and brought Chris a copy of Camp Creepy Time.

Below are some pix of Todd in the 2007 Badwater Ultramarathon. 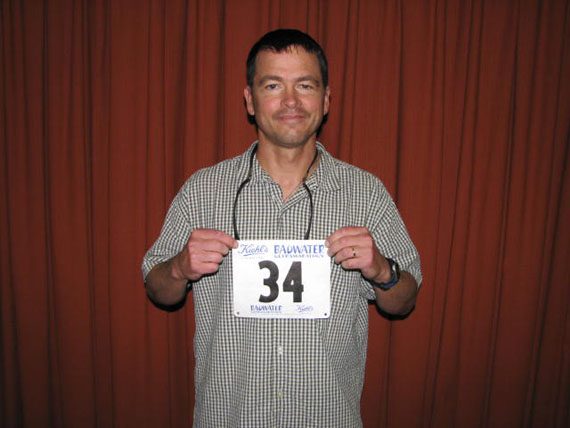 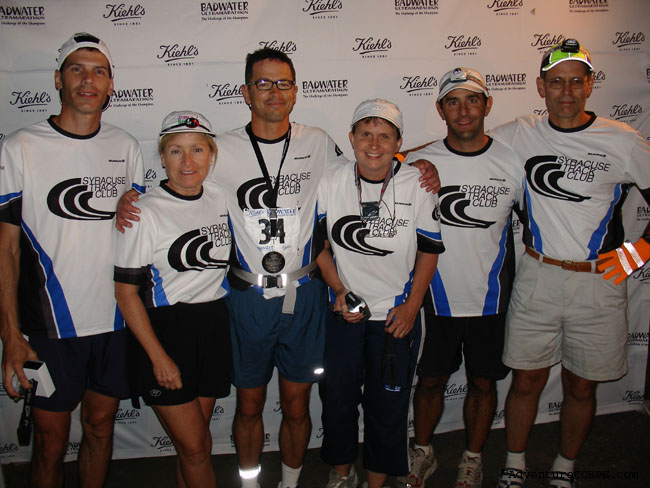 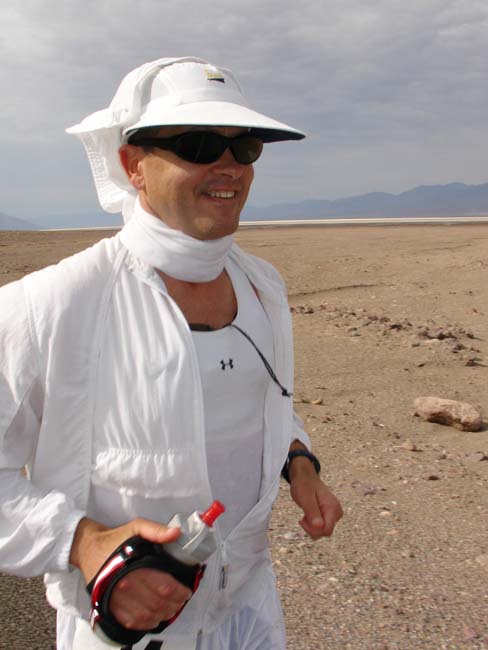 Links to media coverage of Todd’s participation in the 2007 Badwater Ultramarathon and Furnace Creek 508: