In 2012, Lisa Smith-Batchen was inducted into the Badwater Hall of Fame. Her plaque reads:

is proudly inducted into the Badwater Hall of Fame

in recognition of her seventeen years of devotion

to the world’s toughest foot race

as competitor, champion, and coach

Lisa Smith has been synonymous with the Badwater Ultramarathon since the mid-90s when she competing at the front of the race and appearing on magazine covers. As an athlete, she has blazed trails across the globe, winning races like Marathon des Sables, and inspiring others to chase their own dreams. She set the precedent for competing with the top men, paving the way for later standouts like Pam Reed and Jamie Donaldson.

Lisa’s name pops up regularly in the essay section of the race application as the person who inspired the applicant to run, or to compete in Badwater. Coaching athletes is another way Lisa touches athletes across the globe and her students compete every year at Badwater. Likewise for her work as a race promoter; Lisa knows what the athletes need and want in a classic race, and she delivers that with aplomb through Dream Chaser Events, the company she runs with her husband Jay Batchen. Naturally, they met through running and they ran the 2000 Badwater together as newlyweds.

Lisa’s reach extends even further, far beyond sport, as she’s raised hundreds of thousands of dollars for AIDS Orphans Rising, an effort recognized in person by Pope John Paul II at the Vatican.

As an athlete, coach, event promoter, philanthropist, and inspiration, Lisa is an ideal role model and ambassador for the Badwater Ultramarathon. She’s been a shining light at our race for 17 years, and though she has retired from competitive ultrarunning, she will no doubt be a welcome asset to the race for many years to come.

Why Badwater: The challenge, the people; the desert is where I feel most at home. I love the course and I love Ben and Denise Jones who have inspired me since my first day in Death Valley in 1995. Also, AdventureCORPS always has the most amazing volunteers. As a race director myself, I know all the time, effort and dedication that goes into putting on a successful event. They are very much appreciated!

Funniest moments? Laughing so hard with my crew until I threw up. Sand storms where you are being thrown backwards and all you can do is laugh. Many moments when you would rather cry but choose to laugh: getting a flat tire, hearing people use all kinds of swear words when in there every day life they never swear.

Badwater Life Lessons: Badwater was my first ultra and my last. I went from a marathon to 135 miles. I fell in love with endurance and distance running. Badwater taught me that it is not really about the race, yet a journey that will stay with you for the rest of your life. I have learned to trust other people who are there to help you, I have learned that most of the time you can work through about anything. I have learned that a “DNF” does not mean you did not finish, it means “MTRC”: Made The Right Choice and learn to race another day. There are reasons people don’t finish a race. We all start a race with the intention and desire to finish. Something goes wrong along the way and you must make a choice that is right for you! Marshall Ulrich got me into my first Badwater and he is still one of my best friends, more like a brother to me. The relationships and bonding with people that really do care about you will stay in your life forever.

1999: Featured in the film, “Running on the Sun.” Finished unofficially in 48:24 after receiving IV fluids.

2001: Crew for Marshall Ulrich during his Death Valley Quadruple Crossing (“I ran over 350 miles with him.”)

2011, age 50: Hoping for her 10th finish, Lisa DNF’d. She announced prior to the 2011 race that it would be her last Badwater, regardless of the result that year. (“Yes and after five days in the hospital for almost killing myself, I realized that I have done 10 Badwater races and it is OK for myself to give myself credit for my DNF in 1999, the year I got an IV because I did go on to finish!”) 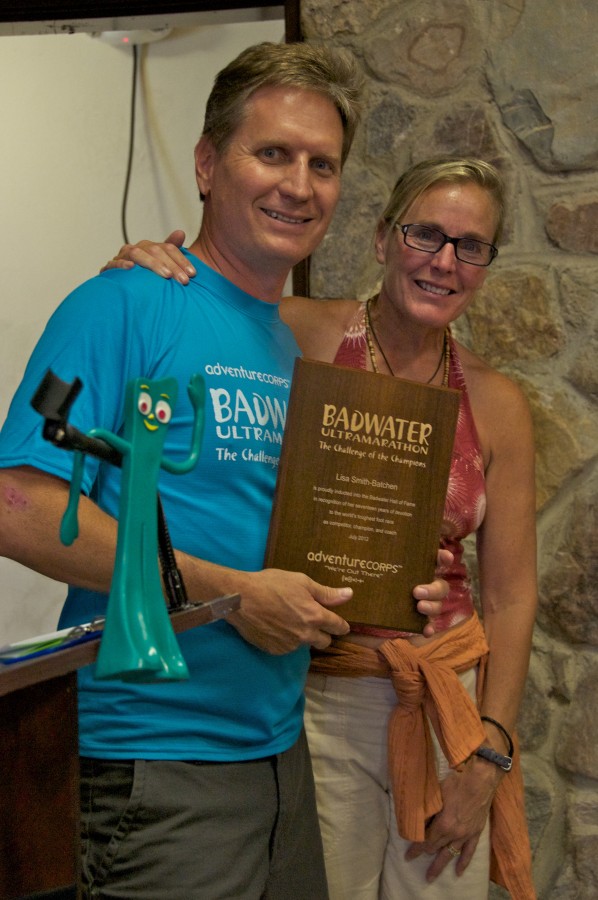