In the lead-up to the 2018 race, we asked 2017 veterans of the Badwater 135 to weigh in with their suggestions and experience with selecting, setting up, and using their “ideal” support vehicle at the world’s toughest foot race, as well as best crewing practices.

We – the race organizers – are big fans of using smaller vehicles, such as mini-vans or even small to medium SUVs, even though they make it a bit harder to carry lots of ice, food, water, and gear for the runner and all the crew members. (Just be space-efficient with your packing and have and implement a good plan to buy ice, water, and supplies at Furnace Creek, Stovepipe Wells, Panamint Springs, and Lone Pine, and you will have all that you need.) We prefer smaller support vehicles because they are much easier to park on narrow shoulders, less likely to get stuck in the sand on those shoulders (which happens many times every year at the race), and they are much easier to drive, easier to pass, and easier to park than larger vehicles.

But first, let us state that – without a doubt – the most popular support vehicle at the race every year is the Dodge Caravan (also known as the Chrysler Town and Country), a mini-van that is less than 79″ wide, less than 68” in height, and less than 203″ in length. We highly recommend this vehicle! If you are renting one, be sure yours is equipped with “Stow & Go” seats which almost magically disappear into the floor of the vehicle. 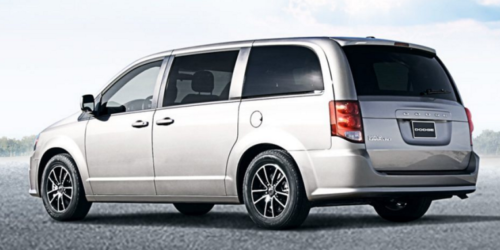 Above: a Dodge Caravan or Chrysler Town and Country is less than 79″ wide, less than 68” in height, and less than 203″ in length. (See the current spec’s.) this is the ideal Badwater 135 support vehicle, because it holds all you need, but is small enough to park on most narrow shoulders.

Here is a selection of the race veterans’ suggestions regarding support vehicles and best crewing practices:

I’m a big believer in less is more. Usually I’m the guy with the least amount of equipment, etc—not because I’m ignorant, but because I bring a lot of items in smaller quantities. This race is all about risk management. For example, don’t bring four pairs of the same shoe. Bring one that you love and another that you could see being a little roomier or cushioned if you get a bad blister. Don’t bring a cabinet with blister gear—bring a ziplock bag with the essentials for quickly treating a blister and getting back out on the run. Don’t bring an additional ice chest just to sit in—bring a mini Gatorade cooler that you can dip your clothing and hat in.  The two years I finished first, we used my wife’s Honda CRV (shown in photos). I wouldn’t recommend anything smaller, but because I didn’t have a million bulky items packed, my crew was able to do a superb job getting me what they knew I would need! 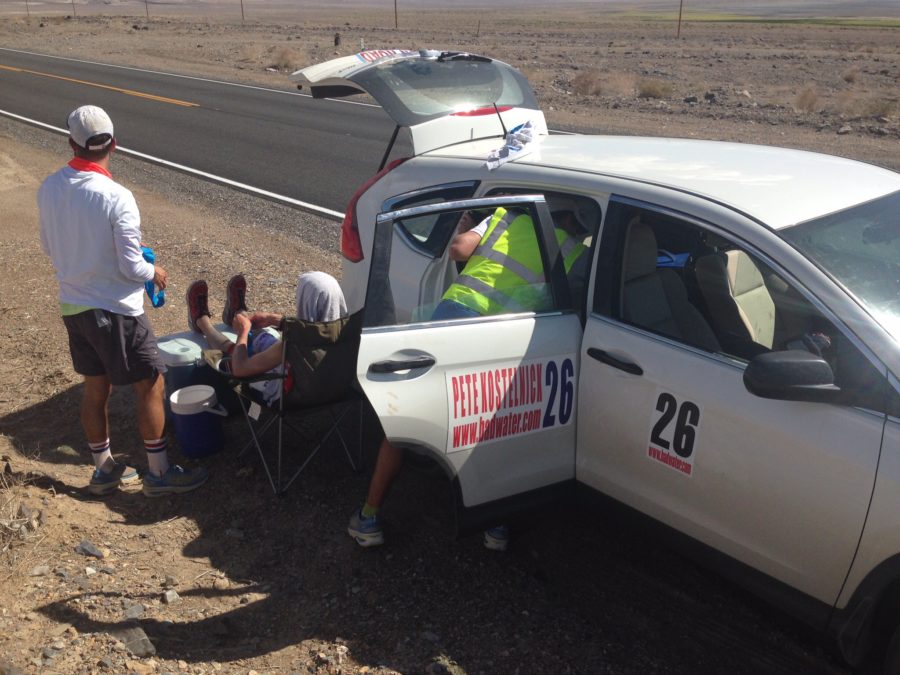 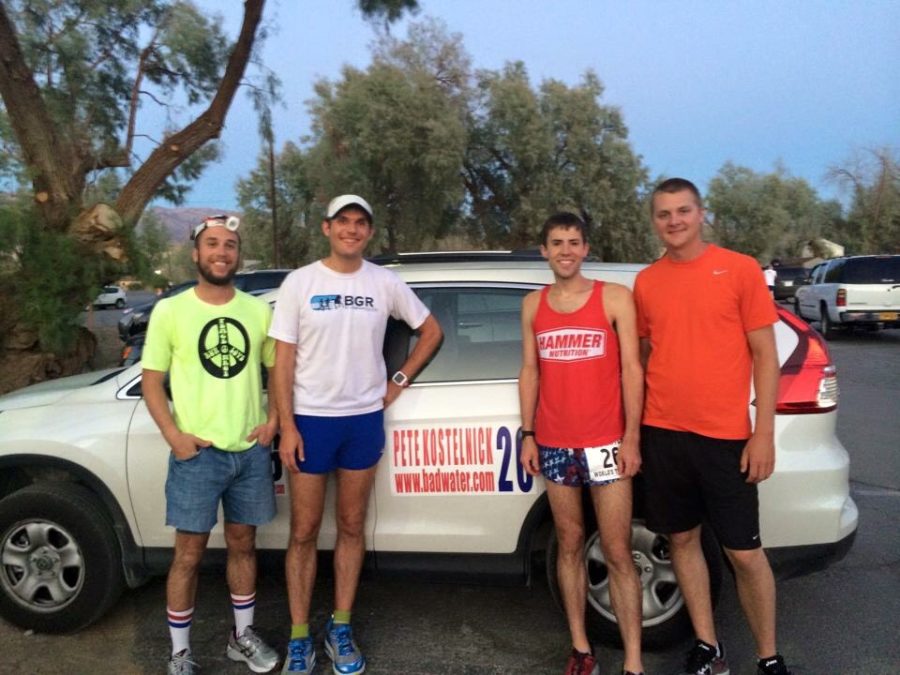 • Driving the course from Furnace Creek to the finish line the Saturday before has proven very helpful and improves crew efficiency. We do it every year and helps all learn where we can and can’t park, and where we might prefer to park/take breaks.

• NEVER take key out of ignition.

• Perform the van set-up during Monday while runner rests, NOT before

• Keeping Air Conditioning off during the race is NO longer needed. New vehicles are engineered for constant A/C.

• Runner has own ice cooler. Because of compromised immune system due to fatigue, keeping a dedicated cooler for the runner with no unprotected hands going into its ice is a must.

• Always have an ice bandana, small ice baggie, and bottle made up and ready in advance of every crewing stop

• Pacer should carry a walkie talkie to radio ahead the runner’s needs. Be sure to find obscure (quiet) channel to avoid confusion with other teams.

• Pacer/crew always comes across the road to runner. Keep runner moving toward finish line, not crisscrossing to van and back. The race is long enough!

• Covering the front seat with a taped down towel for runner/crew rest. If for runner, recline it before they get there.

• Having a tarp to cover the windshield and/or windows to block heat in the event of mid-race issues is a good way to stay cool during an extended break, and may avoid the need to stake out.

• Always keep a record of the runner’s intake of calories, electrolytes, protein, fluids, etc. This makes for a more efficient second day when all are tired and can’t remember these details for reference.

• For those who aren’t frontrunners, insist on certain rest stops for the runner, especially on Day 1. We implement mile rest stops vs. time stops. By running to a certain mile stop it keeps the runner moving a bit faster than saying “let’s break after 5 hours.” As I’m a 40+ hour finisher, we typically break at mile 27, 50 (just past the time cut-off point), 59 (top of Towne Pass), 72 (just past the time cut-off point), 80.6 (Father Crawley turn-off). From there to the finish most plans go out the window.

• Crew rest is as important as runner rest.

• Put one crew in charge as the Crew Chief well in advance of the start, and that person has full authority during the race. As sleep deprivation sets in, crew members’ worst characteristics come to the surface, creating multiple “bosses.” This is alleviated with a designated crew chief.

1. All crewmembers should pack light and use collapsible duffel bags. Not only do you have to get people and supplies for the race in the car, but you are also going to have to carry all of your personal gear: Pack carefully to minimize space!

2. Don’t use duct tape or other similar materials to affix race numbers and signs on the vehicle, especially a rental vehicle. These are very hard to remove after baking in the hot sun. (Use blue “painter’s tape” instead.)

4. Bring a vehicle that has a light colored interior and exterior, if at all possible.

We are currently supporting one of the Aussies who is running this year with the same tips, so here goes:

– in 2016 we used a Dodge caravan. It was great except it didn’t have any 12v outlets at the back to plug in lights etc.

– 2017 I think we had a similar sized Kia, again no rear power but it did have a couple for the back seat that we used. Also, make sure you go over the car in detail: we only discovered a huge space we could have stashed things in when we dropped the van off after the race!

– We used 2 coolers- one for clothes and one for food. Some unbroken ice bags in the food one so we could get ice that wasn’t contaminated for drinks etc. (Yes we had a cooler full of ice dedicated to keeping clothes cool. Probably a bit over the top, but the most important part was we circulated about 6 ‘Buffs’ between runner and cooler. You probably already know that there’s a particular technique for rolling up a buff with a few ice cubes in it. When you put this around your neck, it gives blissful cool for 20-40 minutes, right where the arteries are in your neck. You can make up several of these at a time and have a few hours of peace, just grab one and hand to runner, chuck old one in the cooler for later. And of course this meant we had heaps of ice in an emergency….. but it tasted like a runner’s neck.)

– For similar races in Australia I love to get a roof mounted ‘pod’ where all of the non-race stuff is stored during the race. That gets it out of the car. We were not able to hire one, so that tip is probably only good for your USA-based competitors.

– Get an unusual light for the outside of van so your runner can tell which is the correct van at night because of flashing, colours, etc.

– Because you’re only allowed to open the van doors from right side, we put the sleeping crew member on the left side. Also an eye mask is good.

– For bragging rights, get an LCD thermometer and tape it to the outside of your van so you can photograph it during the race without actually getting out and experiencing what your runner is feeling….. 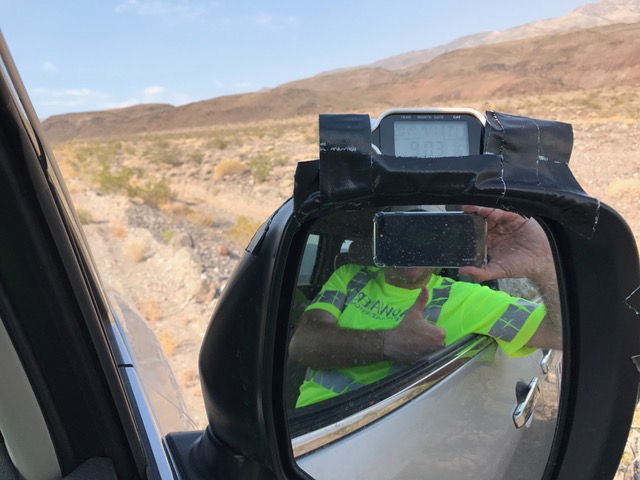 – We tested making a shelter with a couple of poles and a tarp, connected to the car but it was just annoying in the end and we gave up.

– We taped our ‘stake’ to the inside of the car: 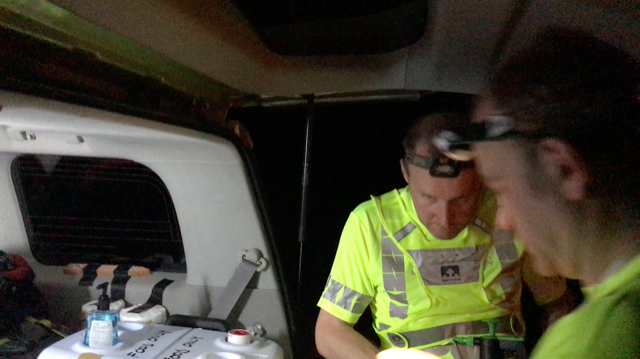 – Antibacterial hand wash, and the coolers, were also marked as in the above pic.

– Oh, and we had a mascot on our dashboard. His name was Ernie, for no particular reason: 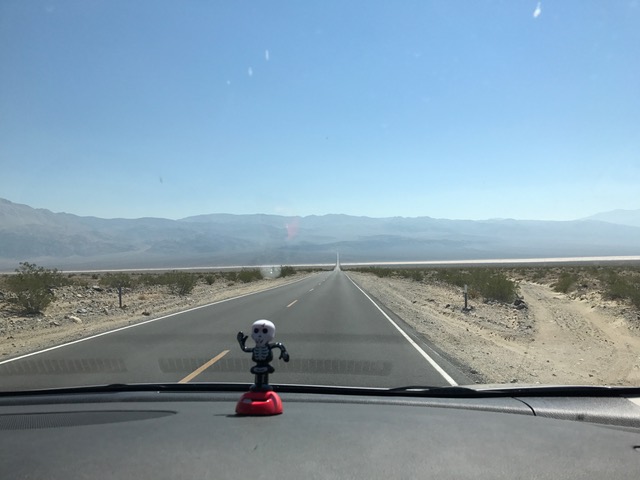 Andrea Kooiman, three-time finisher, recommends a mid-size SUV, such as her own personal Jeep that she used in 2017 with a four-person crew: 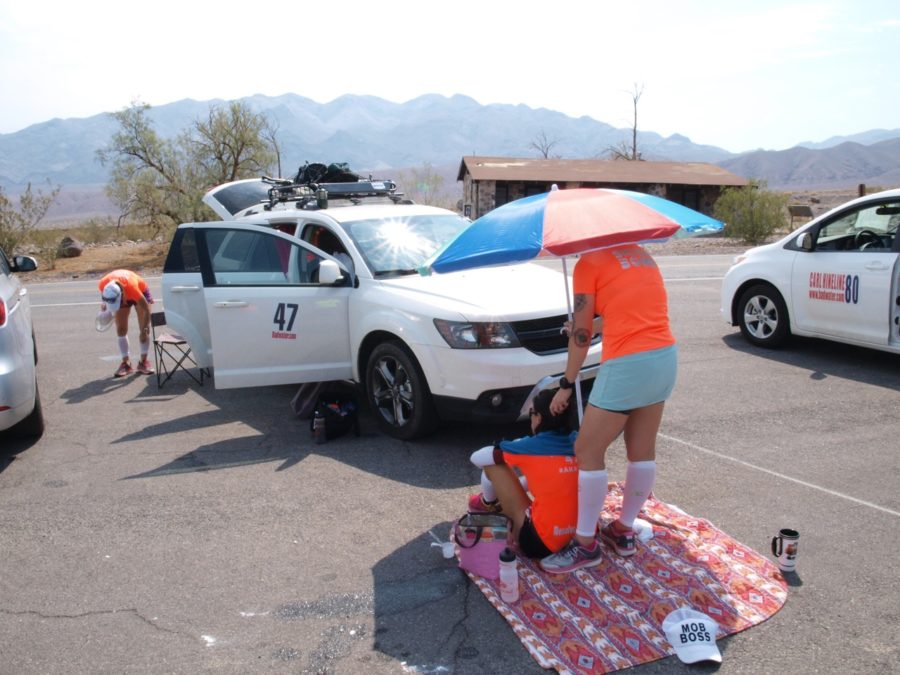 But please note, although there are certain advantages to using a vehicle this large (mainly, lots of space for crew members and for lots of coolers and gear), it will also be VERY difficult to park along many parts of the race route because of very narrow shoulders. We therefore do not generally recommend this vehicle, although it is allowed. 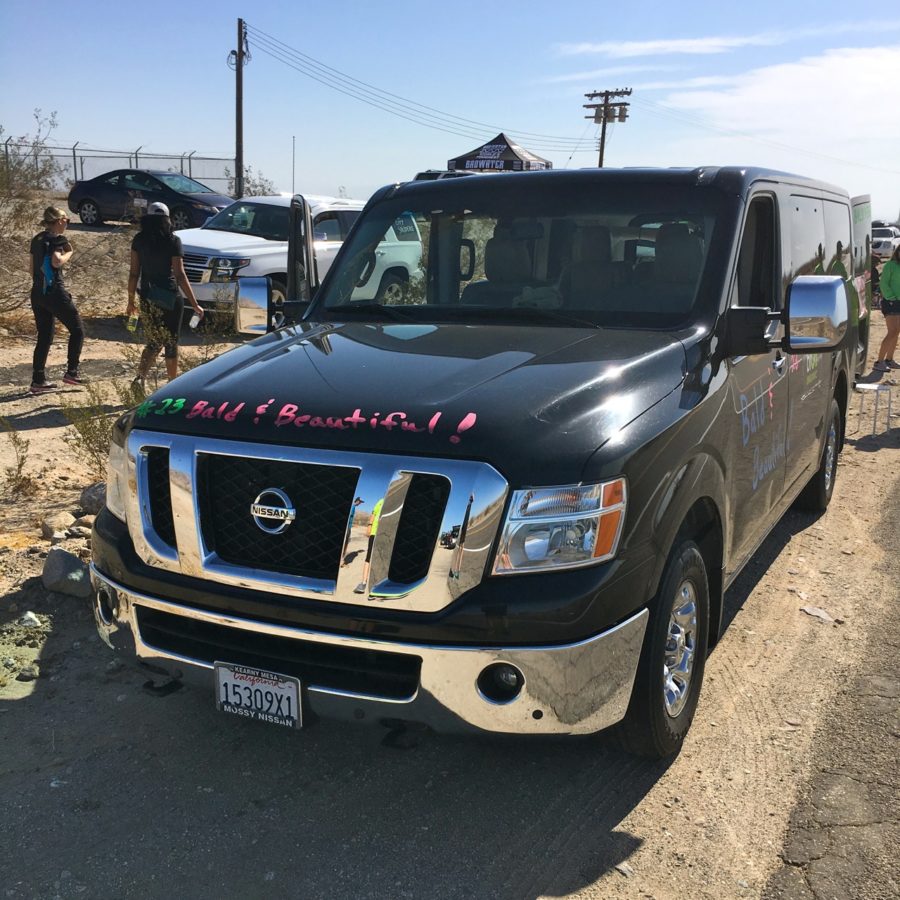 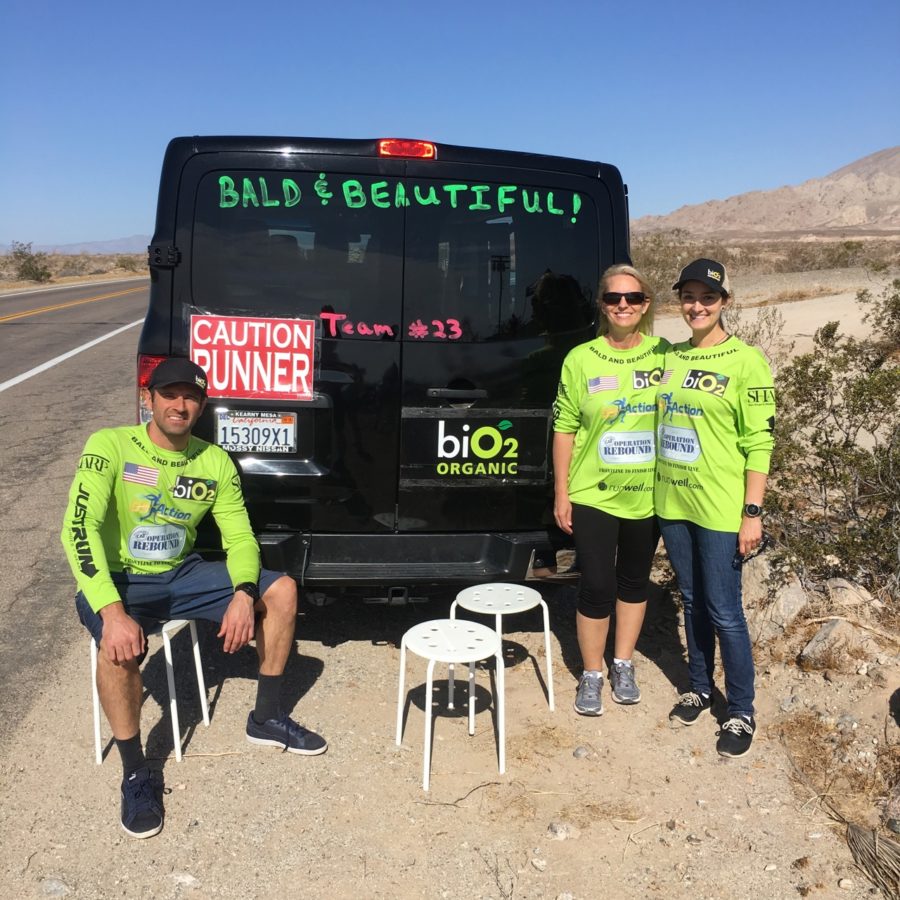 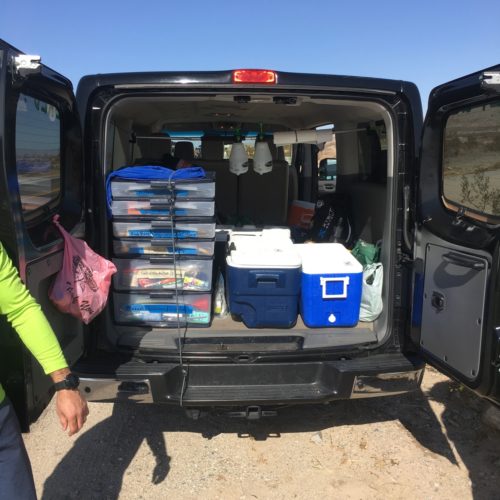 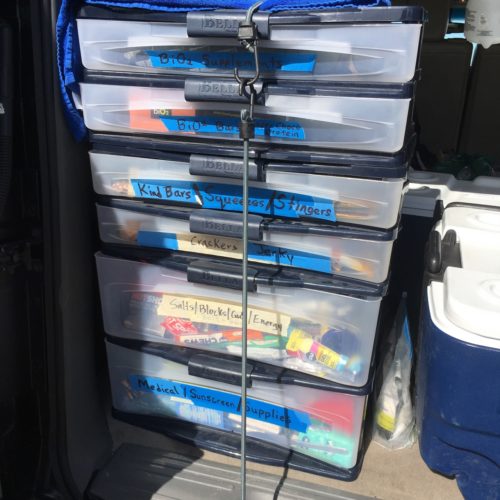 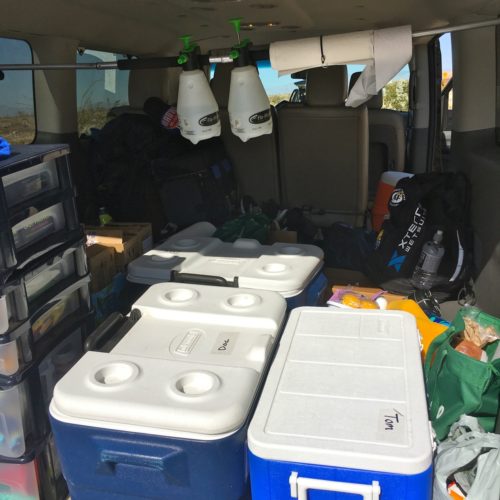 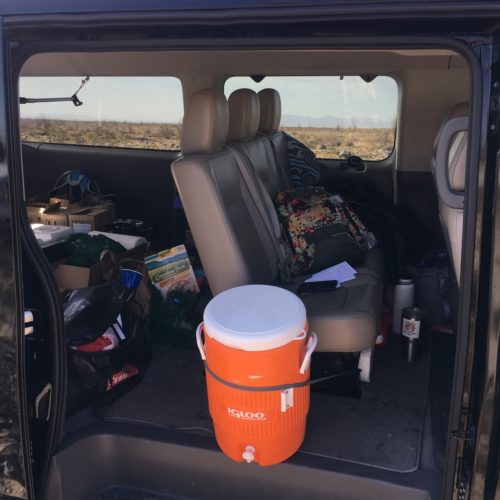 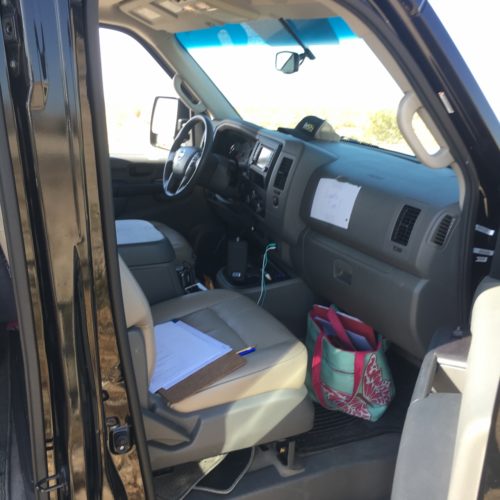