So, here I was—standing at the 10am starting line of the 2007 Kiehl’s Badwater Ultramarathon. I was ready to live out a dream. The training was done. No more long runs in a heavy black sweat suit and hat. No more daily sauna sessions. No more long runs on pavement instead of trails. No more runs up fourteeners. The car was organized. The pre-race activities were finished. The pasta carbo-loading dinner was being digested. My crew practiced their responsibilities. All I had left to do was run.

10, 9, 8, 7, 6, 5, 4, 3, 2, 1…we were off! Cheers filled the air from the runners. Finally! The road was very crowded with runners and crew vehicles. I just wanted to stay on the white line so my feet could stay cooler. I was excited to meet up with my crew for the first time.  My crew consisted of my husband David, my sister and her fiance, Connie and Rob, and my brother in law and sister in law Steve and Alicia. David was in charge of making t-shirts for all the crew members. He knew that most crews would be wearing white, so he designed pink t-shirts. That was an awesome idea because I could see them from a distance. When I reached them, they were very efficient and got me out quickly. They were beyond amazing the entire race!

I felt very strong. I got to the first check point, Furnace Creek (17.4) at 2:26 (elapsed). Nothing seemed to bother me. I was eating, drinking, and the heat wasn’t as issue for me. I got to Stovepipe Wells (41.9) at 6:46. When I got to the first mountain pass, Townes Pass, I power walked up. It is an 18 mile up hill. Once at the top, I was excited to run down. It was a steep 8 miles back down. At Panamint Springs (72.3), I began to feel the onset of several things. My left shin was red and swollen. It hurt a lot to move after that downhill. I had severe bloating and began throwing up. I had blisters that covered most of my feet. My husband knew I was in trouble, so he offered to walk with me. David was definitely one that could motivate me and keep me going. We powered over the next mountain range at about 3mph. Every step hurt more and more, but I didn’t want to let him or my crew down. They gave up some much and worked so hard for me.

Finally, we made it to Lone Pine (122.3) in 30:47. My husband just walked me through 52 miles. He didn’t complain once about having to walk in the dirt and rocks alongside of me. He didn’t speak of the heat or his hunger or my less than positive attitude. I always knew I was lucky, but wow, that was love! Surprisingly, I was still the first woman as I turned on the last road to Whitney Portal. David was ready for a break and I was ready for the last 13 miles!

Most people take about 4-5 hours to complete the last section. I was hoping for about 6-8 hours. Unfortunately, my power walk turned to a painful 1mph shuffle. I have never felt pain like that before. As I slowly continued, I saw Lisa Bliss. She talked with me for a moment as she ran strong past me. She looked amazing. Sure, it hurts to lose the lead at the end, but as I looked around, I felt really lucky. I was on this road to the portal that was so amazingly beautiful. I had my crew still beside me cheering me on every step of the way.  As people came down the mountain, they cheered me on. Runners passing me hugged me and wished me well. Other crews stopped to see if they could help out. That is what kept me going up the mountain.

11 hours later from Lone Pine, I turned the corner to see the race director, Chris Kostman (who was so supportive throughout) and the big white and blue finish line tape. My entire crew joined me one last time as somehow I started running towards the tape. The support I felt was so overwhelming that emotions overcame me as I finished.  I really felt like I was part of the Badwater Family! The Badwater Ultramarathon is more than a race. It is a lesson in life that will stick with me forever. 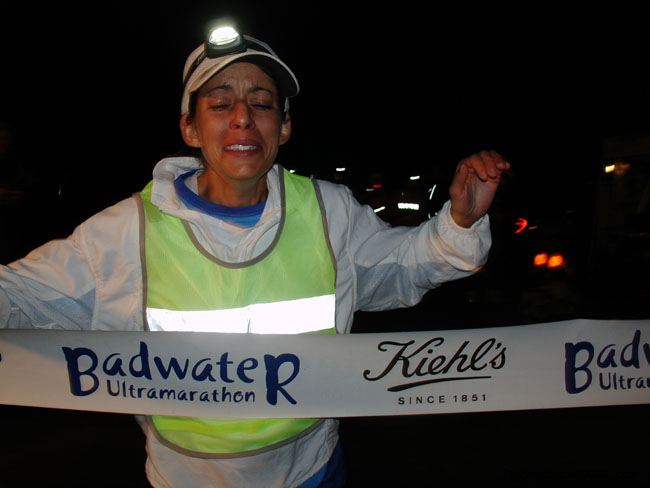 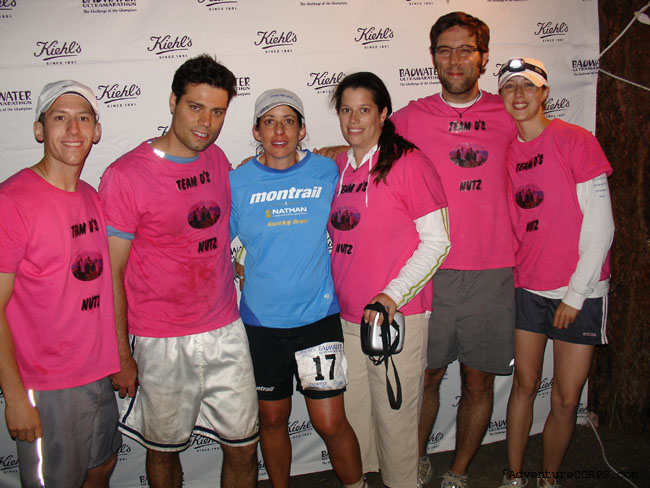