In recognition of their 17 years on the race course as athletes, camp hosts, volunteers, crew members, race ambassadors, and Mayor and First Lady, Ben and Denise Jones were inducted into the Badwater Ultramarathon Hall of Fame in July, 2007. Both of them are three-time official finishers, as well as training camp hosts and mentors to many Badwater runners.

Denise has crewed Ben three times (1991, 1992, and 1993). On crewing her husband Denise says, “He is delightful to crew, one of the best-natured people on the planet. Never complains and is always kind and it was always fun!!!”

Her crewing resumé for other Badwater crossings and desert crossings is as follows: 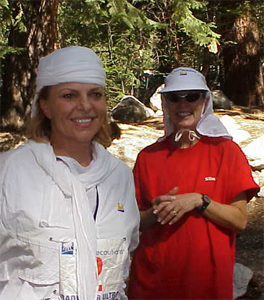 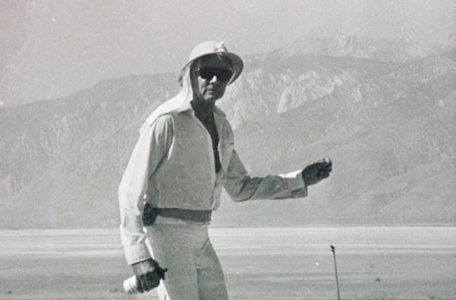 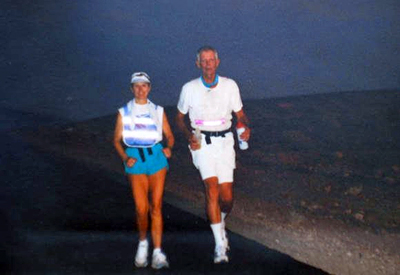 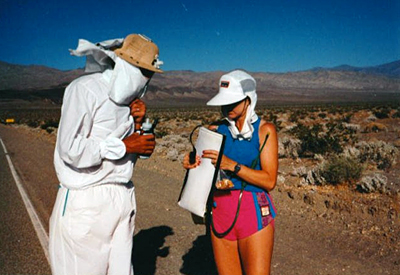 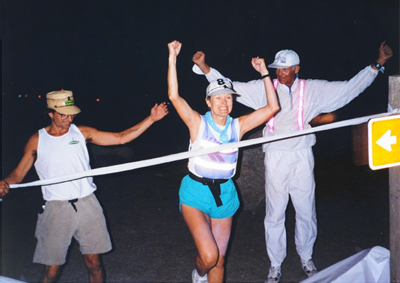 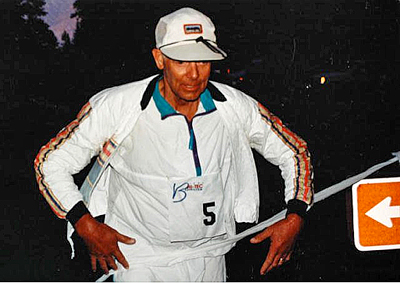 Ben is an avid photographer of Death Valley, the Eastern Sierras,
and various ultrarunning and ultracycling events.
Click here to check out his many great photos!

My introduction to Death Valley was in talking to several great aunts who first went to Death Valley in the ’20’s via a Los Angeles-to-Baker train line. Along the way were the Harvey Houses. Then there was the Tonopah-Tidewater Line to Death Valley Junction. From there a spur-line took them to Ryan and then a coach to Greenwater (Furnace Creek). They used to tell me of the adventure which took about a week each way in those days.

My folks first took me to Death Valley in the late ’30’s. There is a picture of me at Mushroom Rock (which appeared larger then). In 1963, I moved to Lone Pine (mile 122 on the race course) to practice medicine, where I have been ever since. In 1965, I was offered office space across from Furnace Creek Inn. I went there on my “days off’ during the Harvey Company’s tourist season (October to May) for over twenty five years. At the time I had an airplane (Cessna 205) making the trip easier and more fun. During those years, after seeing patients at the clinic, I would train in and around the area.

In the decade from 1977 to 1987, I had (later) heard that there were about 10 individuals (with documented records) who did a solo crossing from Badwater to the top of Whitney (146 miles) as well as about ten others who are on record. About this time, Hi-Tec Sports USA created a race on the Badwater to Mt. Whitney route in order to promote the “Badwater 146” running shoe. In 1989, seven finished.

In 1990, there were seventeen finishers and I knew two runners who had been “invited.”  I went out on the course to try to find them but couldn’t as they were doing the “bed and breakfast” version. The first runner I saw was “Marshall.” and, at the time, I thought that was his last name. Later I met other faster frontrunners, followed by those runners “reduced to walking.” My thoughts were, if I just walked, I could do it also.

In 1991, I asked to be “invited” and was accepted about three weeks before the event. Over the Fourth of July Holiday, I was “walking” along near Keeler when a vehicle pulled over to see what was happening. It turned out to be Tom Crawford, Rich Benyo, Rhonda Provost, and Drew Benyo on their way to their annual training camp at Panamint Springs Resort. I was already familiar with their article, “From Fire to Ice to Fire” in UltraRunning Magazine and Richard’s book, “Death Valley 300.” I asked to be “invited” to train with them so, on the next day; we did a practice run from Badwater to Furnace Creek. (Editor’s note: Crawford, R. Benyo, and Provost are all Badwater Ultramarathon Hall of Fame members.)

Later, after my first successful “race” in 1991 they were even more impressed that I had taken time out during the race to do an autopsy. It was on a fallen trekker who was not successful in navigating the saltpan of Lake Manley (Death Valley). They also liked the idea that one of my cooling devices was a water-filled casket in a U-Haul truck. These happenings lead to the concept of “Mayor” and “First Lady” of Badwater. After that I had two more successful crossings, in 1992 and 1993. My wife, Denise, also subsequently had three successful crossings, in 1994, 1996, and 1999.

Denise and I got married in 1990. In the early ’90’s, we began to bump into other runners training for Badwater. We began organizing heat-training clinics to help the athletes prepare for the races. We held them on Memorial weekend and Fourth of July weekend each year. Over the years we got to really know the folks who attended and their crew members, pacers, family members, as well as some interesting newbies and wannabes. It made it much more interesting and fun when the race finally happened each year. We were able to provide useful information about replacement of fluids, electrolytes and calories as well as heat adaptation. This has translated into a success rate of about 85% for the attendees. In addition, we have crewed (and paced) runners during some of the races as well as some on their own solo adventures.

Denise and I were in the 1994 race as the “Mayor” and “First Lady” of Badater. She was successful in getting to the Portals and to the top of Whitney. I had renal failure and dropped at 41 miles. We both entered in 1996, but as two separate teams. Again, she was successful in making it to the Portals. A storm kept her from making the top that year. I dropped due to exhaustion from overwork and issues of depression (not race related). She was again successful in 1999.

1999 was a big year for media coverage. Kirk Johnson, sports editor for the New York Times, came to our clinic and did the race that year. Following his performance he wrote a book entitled “To the Edge.” Also, “Running on the Sun” was directed by Mel Stuart and produced by Leland Hammerschmitt in 1999. Kirk Johnson, Marshall Ulrich, Lisa Smith, and many others are featured in this production, along with me. 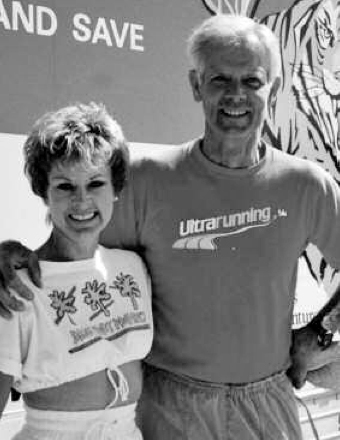 I turned 70 at the end of 2002 and decided to try it as the first ever 70-year old in 2003. This time I suffered from the 139 degree temperatures and my own 101 degree internal temperature. I decided, being the only one on call for the Inyo and Mono Coroner’s Offices that I didn’t want to have to do an autopsy on myself. Besides that, I was having hallucinations about being in the Garden of Eden and seeing Mary Magdalene as well as being wrapped in a shroud (of Turin).

Other athletic experiences in the area have included the annual Death Valley-Whitney bike race, which I did eight times in a row. In 1991, I ran the first Titus Canyon/Death Valley Marathon (and the four after that). Actually, I had practiced on that course on my own before that.

Our further involvement in Death Valley included supporting the following: (1) Marshall Ulrich’s South-to-North Crossing of Death Valley National Monument; (2) Marshall’s Death Valley Solo, Unsupported Crossing (we were present with the camera); (3) Scott Weber in his Oasis-to-Oasis Triple/Quad; (4) Denise helped Rhonda Provost by pacing her up and down Mt. Whitney as the first woman to do the Double Crossing in 1995; (5) Denise crewed Shannon Farar-Griefer as the first woman to do the Double Crossing within the race context; (6) Denise crewed for Adam Bookspan in the South-to-North Crossing in 2002; (7) Denise crewed for Lisa Smith-Batchen with Double Crossing in 2006. 8) Last summer, I had the pleasure of helping Scott Jurek, along with his wife, Leah, with a day of desert training as well as filming his workout performance. I then crewed for Pam Reed during the 2006 race.

Denise has crewed for the race and in solo crossings a total of 15 times, which includes 3 double crossings. This led to her to join with Theresa Daus-Weber in writing a book about crewing. “Death Valley Ultras: The Complete Crewing Guide” was published in May 2006. It is a technical guide with a comprehensive collection of information to plan and crew a successful Death Valley ultra with instructions, tips, a list of the known Death Valley crossings, and a photo gallery of views from the Badwater Ultramarathon course.

There were two nice publications during 2006. The first was an article featuring me in Best Life (Men’s Health), by Rodale Publications in the March 2006 issue. The title of the article is, “A Prescription for Lifelong Health.” A photographer visited me and took 20 rolls of 12 shots each with his Hasselblad camera using IMAX film; one was used in the article. Then I was interviewed by the executive editor for three hours for the two-page article. The second was a DVD produced by PBS/Nature entitled, “Life in Death Valley.” While they were there on a half-dozen trips, not only did they film the wildlife, but they were also involved in flash floods, a once-in-a-lifetime wildflower display, and the Badwater Ultramarathon. I was pleased to be a part of the feature.

All in all, we have seen this Race from a complete perspective: participant, camp host, volunteer, crew member, “Race Ambassadors,” as well as “Mayor” and “First Lady.”

Badwater/Whitney has become a way of life for us. Doing the race is not necessarily “good for the body,” but is offset by being good for the mind, soul, and spirit. The concept of adventure racing and extreme sports is here to stay. We enjoy keeping up with our friends and meeting more people who share the same types of adventures.