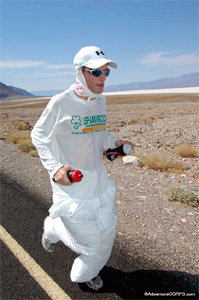 My success at Badwater was entirely due to the fact that I was surrounded by high quality, dedicated people who genuinely wanted to help me be successful. Badwater was not an individual achievement but rather a team effort. A group of four Badwater virgins somehow entered Death Valley and managed to traverse 135 miles through the steaming, hot desert and come home with the coveted sub 48 hour buckle.

There were challenges along the way that I’ve never encountered in any ultra running event I’ve participated in but they were overcome because of the strength of the team.

While no one other than me had a particular role at the start each acquired their own identity as the race progressed. The lone female member of our team was the leader and took control when I needed her most. I leaned on her hard and she never once let me down. My friend from Wisconsin was the silent strength of the team. He could relate to the suffering I was experiencing as he too has suffered and persevered through grueling events.While he communicated in a different way than my other two crew members I was able to understand and benefit. My third crew member and my best friend and confidant experienced my worst moments with me. He could very well have left me in the desert whining to myself but what he did instead was listen. I was walking death between miles 115-122 as we looked for Lone Pine. I relied on my best friend to be my life support system and somehow he kept me moving forward.

Badwater was a success not only because of the finish but also because of what I learned about others. I had two total strangers enter my life on those 3 days and they stood by my side until the bitter end. My one good friend who went into the valley of Hell with me showed me that indeed he is the best friend I’ve ever had. I learned that I have two very good friends that live far away but despite the distance we will always be friends and I can always count on them to be a positive influence in my life. I learned that it is okay to lean on others once in awhile and that true friends will indeed come through for me under any and all circumstances. Badwater is indeed a team event and without a strong group of people surrounding the runner success would be impossible. 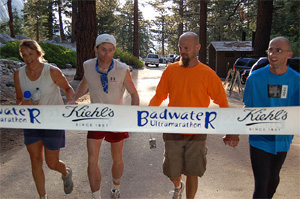 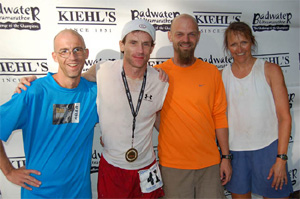