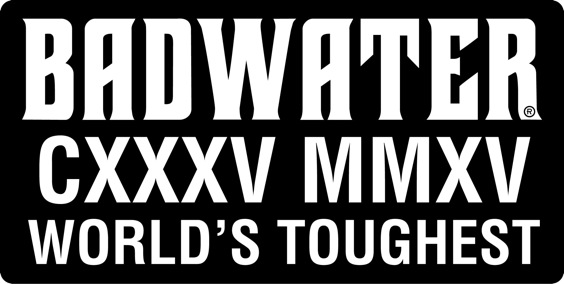 Death Valley, CA: On July 28-30, AdventureCORPS presents its legendary Nutrimatix BADWATER® 135. Now in its 38th year, the world-renowned event pits up to 100 of the world’s toughest athletes against one another and the elements. In scorching temperatures and at altitudes as high as 8,300 feet, runners, triathletes, adventure racers, and mountaineers from 24 countries and 22 American states face off in a grueling 135-mile trek non-stop from Death Valley to Mt. Whitney, CA. Widely recognized as “the world’s toughest foot race, “ it is the most demanding and extreme running race on the planet.

A true “challenge of the champions,” the 2015 Nutrimatix Badwater 135 features 59 Badwater veterans and 38 rookies: die hard “ultra-runners” of every speed and ability, as well a athletes who have the necessary running credentials, but are primarily known for their exploits as adventure racers, mountaineers, triathletes, or in other extreme pursuits. With the most international field in race history, the athletes represent twenty-four countries by citizenship or residence: Argentina, Australia, Brazil, Canada, Colombia, Czech Republic, France, Germany, Guatemala, Ireland, Japan, Jordan, Mexico, Netherlands, New Zealand, Philippines, Poland, Serbia, Singapore, Spain, Sweden, Switzerland, United Kingdom, and United States of America (with 22 different American states represented).

There are 29 women and 68 men. The youngest runner is 22 (rookie entrant Breanna Cornell of Florence, AL) while the oldest is 80 (14-time competitor Jack Denness of Rochesteer, United Kingdom), with an average age of 46. Full roster details are available here: http://dbase.adventurecorps.com/roster.php?bw_eid=74&bw=Go

The men’s course record is held by Valmir Nunez of Brazil with a time of 22:51:29 set in 2007, while the women’s course record of 26:16:12 was set in 2010 by Jamie Donaldson of Littleton, CO. It is expected that the winner of the 2015 Nutrimatix Badwater 135 will finish in under 24 hours. The average finishing time is approximately 40 hours, while the overall time limit is 48 hours. For those who finish in less than forty-eight hours, their reward is the coveted Badwater 135 belt buckle, pictured below. There is no prize money. 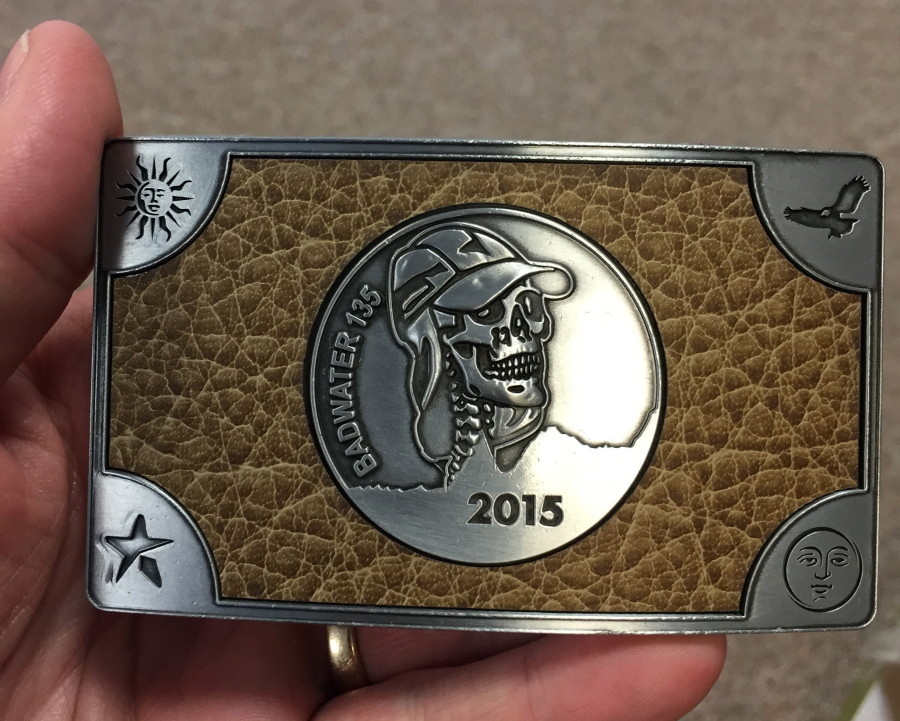 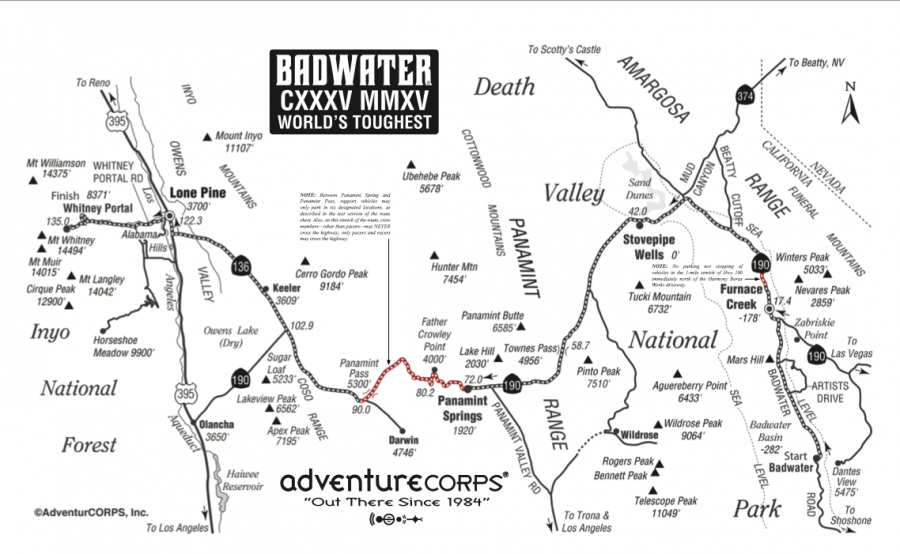 The Badwater 135 is the final event in the Badwater® Ultra Cup, a three-race series which began with the 51-mile Badwater® Cape Fear in March, continued with the 81-mile Badwater® Salton Sea in May, and now concludes with the Nutrimatix Badwater 135 in July. Those runners who complete all three events in the same calendar year are featured on the Badwater.com website and their virtues are extolled throughout the Internet and in future editions of BADWATER Magazine. In 2014, seven remarkable athletes completed the entire Badwater Ultra Cup, while this year ten have completed the first two Badwater races and will toe the line at the third and final race. Info: http://www.badwater.com/event/badwater-ultra-cup/

Now in its sixteenth year producing this race, AdventureCORPS is pleased to welcome a new title sponsor, Nutrimatix, makers of the world’s best tasting, all-natural vitamin powder sticks, blended using a combination of personal fitness data and responses to an interactive lifestyle questionnaire. These customized supplements are backed by real science and more than 30 years of pharmaceutical and exercise research, as well as through three consecutive Badwater 135 finishes by the company’s founder and CEO, Sergio Radovcic. We also greatly appreciate the support of Caring House Project Foundation, ZZYXXZ, Nathan Performance Gear, and ZombieRunner.com, plus the local support of Furnace Creek Ranch, Stovepipe Wells Resort, Panamint Springs Resort, Dow Villa, Pizza Factory, the community of Lone Pine, CA, the people of Inyo County, and other generous companies and individuals. More info: http://www.badwater.com/about-us/sponsors/

Official Charities of the Badwater 135 include the Challenged Athletes Foundation. As one of the very few charities that provides grants directly to athletes with a physical disability, the Challenged Athletes Foundation has raised over thirty million dollars and directly assisted thousands of challenged athletes world-wide. AdventureCORPS also supports the Bald Head Island Conservancy, Conservation Alliance, and One Percent For The Planet. One of the goals of the Badwater 135 is to raise funds for, and awareness of, these organizations. More info: http://www.badwater.com/about-us/charities/

This year, over 50 of the race entrants are competing on behalf of a charity of their choice. Some of those include Be Change, Caring House Project Foundation, Challenged Athletes Foundation, Death Valley Natural History Association, Hope So Bright, Operation Eyesight Universal, Running Works, The Herren Project, and others.

This year’s race celebrates the 38th anniversary of Al Arnold’s original trek from Badwater to Mt. Whitney in 1977. Arnold, an ultrarunning pioneer and human potential guru, competed in a solo effort: it was just Arnold and his support crew against the elements and the clock. The official head-to-head race began ten years after Arnold’s pioneer trek, in 1987, and has been held annually without serious incident, fatality, or any citations issued by any branch of law enforcement. For more info about Al Arnold and also the original race click these links:

For the duration of the 2015 race, fans can follow the race through a “live” webcast at http://www.badwater.com/2015-badwater135-webcast/

The Badwater 135 is held under permits from Death Valley National Park, California Department of Transportation, Inyo National Forest, and Inyo County. Media attending the event may be required to obtain permits from some of those same agencies.

Oak Park, CA-based AdventureCORPS®, Inc. is an athlete-run firm producing and promoting ultra-endurance sports events and the world’s toughest brand, BADWATER®. AdventureCORPS’ world-class events for athlete-adventurers include epic races such as the Badwater® 135, BADWATER® Salton Sea, BADWATER® Cape Fear, and Silver State 508™, and other events. AdventureCORPS products include Badwater® Apparel, Badwater® Skin Care, Badwater® Gear, as well as other great lifestyle items and services. Founded in 1984 by Chris Kostman, this group effort is dedicated to exploring the inner and outer universes, seeking adventure, energy, and insight both in daily life and “out there.” More info: www.adventurecorps.com and www.badwater.com. Badwater® is a registered trademark owned by AdventureCORPS, Inc.

Follow the race on Twitter via @Badwater (Join the conversation by adding hashtag #Badwater135 to all your tweets about the race.):

Follow the race staff’s live photostream on Instagram via @BadwaterHQ (Contribute to the photostream by adding hashtag #Badwater135 to all your IG images about the race.):

Follow the photostream of runners and crew members on Flickr (Racers and crews who are members of the group may submit up to 25 photos per day during the race and afterward.):