As we finalize qualifying standards to apply for the July 6-8, 2020 Badwater 135, we’ve been analyzing DNF data from the past five races:
2015:
8 of 38 rookies = 21% DNF’d
10 of 59 veterans = 17% DNF’d
2016:
5 of 46 rookies = 11% DNF’d
8 of 51 veterans = 16% DNF’d
2017:
6 of 38 rookies = 15.8% DNF’d
14 of 57 veterans = 24.6% DNF’d
2018:
9 of 49 rookies = 18.4% DNF’d
21 of 51 veterans = 41.2% DNF’d
2019:
6 of 51 rookies = 11.8% DNF’d
10 of 44 veterans = 22.7% DNF’d
Based on the data, there is a clear trend for veterans (defined as those who have FINISHED the race previously) to be more likely to drop out.
Of course, whether veteran or rookie, DNFs happen because of many reasons, some of them out of the control of the runner. Just a few of a zillion possible examples:
– The runner getting sick right before the race starts
– The support vehicle breaking down during the race
– A crew gets tired of crewing and packs up and leaves the course when their runner just needed a nap, effectively forcing the DNF, even with the finish clearly within reach.
– And this year (2019), your race director couldn’t help but wince when one veteran who DNF’d told him that he dropped because he wasn’t going to meet his time goal.
Finishing as the Top Priority is the foundation upon which ultra running is built.
And there’s a reason that every Badwater 135 finisher – whether first, last, or in between – receives the same “holy grail of ultra running” belt buckle and Official Finisher t-shirt: because finishing the race – above all else – is the goal of the event.
Two-time champion Pete Kostelnick was having issues this year, but he staked out at mile 101 and drove into Lone Pine to rest and recover for six hours. HIs crew member Scott Bridgeman described the situation thusly:
“He was having an unblemished race and had worked his way into 4th position. Around mile 90 I witnessed one of the most superhuman feats of my life, including my 23 years of military service. Pete began having hamstring issues that prevented him from running. He trudged on for many miles. TBH, I was saddened and heartbroken for him. I thought his race was over. Little do I know. Finally, at mile 101 he made the decision to “stake out” and have a rest. He had a cheeseburger and a nap and returned to his stake 6 hours later. He made the final run from miles 101-135 in a blistering 6.5 hours. He did the final 13 mile monstrous climb in 2:23, the fastest known time. I have never witnessed anything like this. I saw many other world class racers from around the globe go through similar issues. These people not only come back from the dead, but they do so with strength, determination and resilience. I am inspired and changed.” 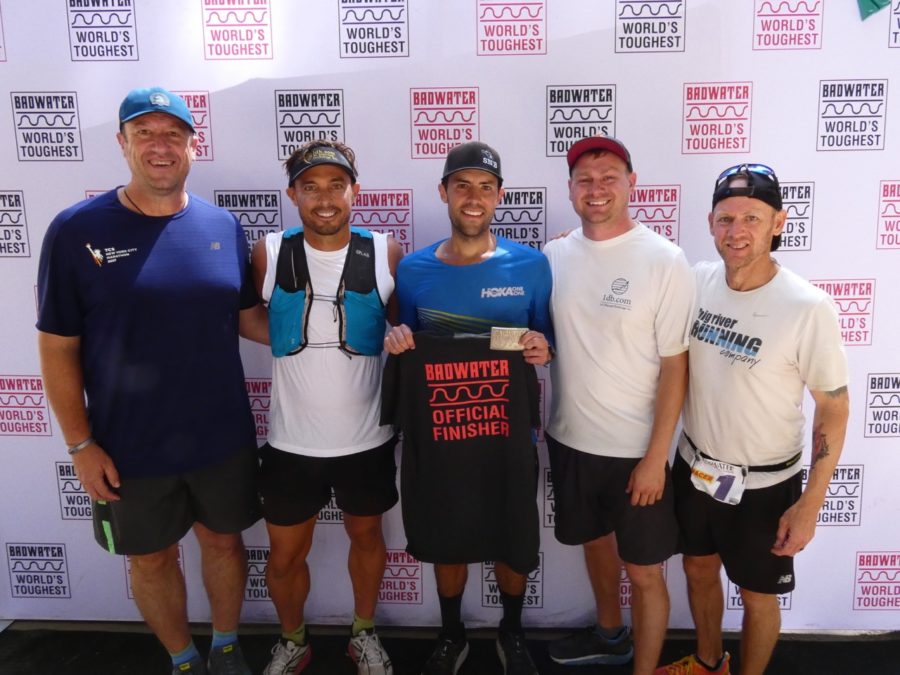 Pete Kostelnick and crew at the 2019 Badwater 135 finish line.

So, hats off to Pete, who was just as much a champion this year as when he won the race in 2016 and 2017.
To state the obvious, the race isn’t over until the 48th hour has passed! We have 100 belt buckles and 100 t-shirts ready to hand out: the runners and their crews just need to arrive within 48 hours to claim theirs!
Consider Kim Budzik: She hit Darwin at mile 90 just one hour ahead of the 500am cut-off there on Wednesday morning. Yet – with her crew supporting her every step of the way – she became the final finisher with a time of 47:34:29. That was her slowest finishing time yet, but you know it was the sweetest of all her seven finishes! 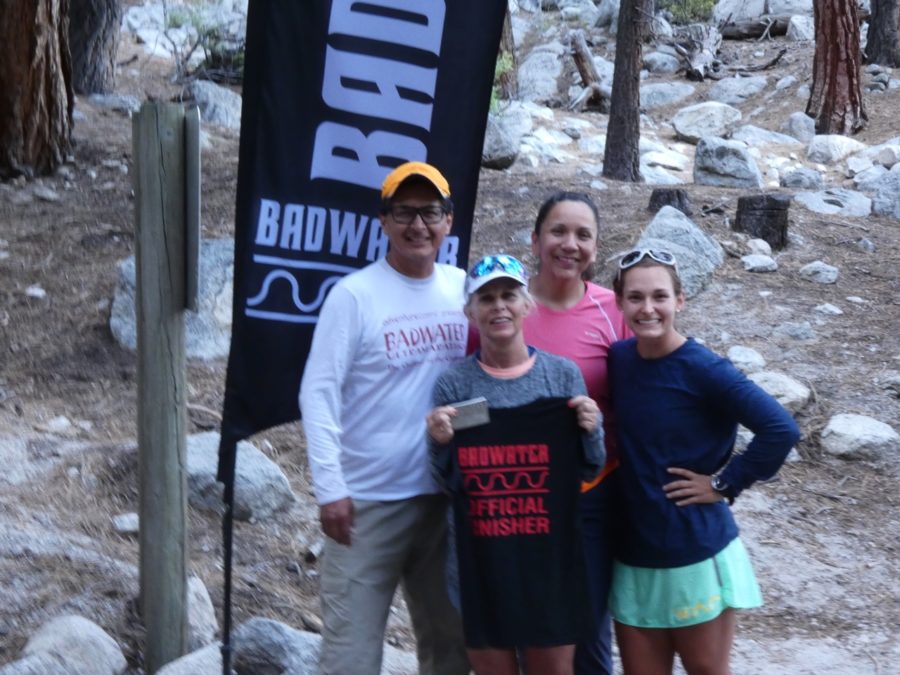 But what about the last male rookie to finish? Ted Williamson of SoCal had been on a crew last year, but it was his first time competing this year (having completed Badwater Cape Fear in March and Badwater Salton Sea in April.) He hit Darwin at mile 90 in 29.5 hours, so he was 3.5 hours ahead of the cut-off there. He hit Lone Pine in 40:53 (which has a 42-hour cut-off), and then worked his way methodically up the mountain to the finish line. I’m guessing there was nothing “glamorous” about it. But he got it done, with a 46:41:44 finish (a 5:49 half-marathon split)! 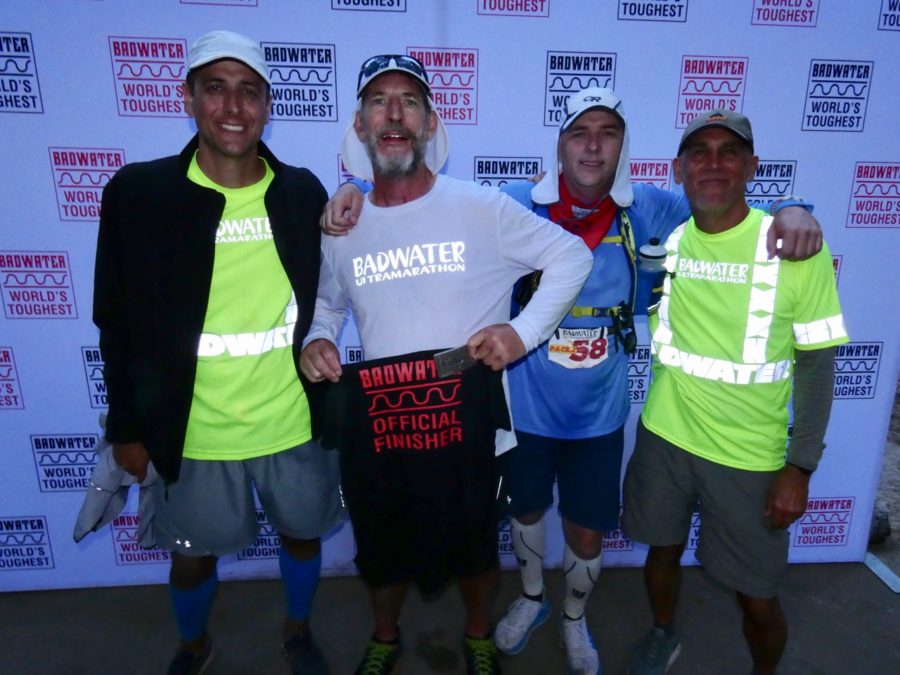 Ted Williamson and crew at the 2019 Badwater 135 finish line.

And the last female rookie? That tip of the hat goes to Wendy Murray of North Carolina. Like Ted, she had crewed last year, and ran both Badwater Cape Fear and Badwater Salton Sea this year. She hit Darwin at mile 90 in 30:04, so she was just under three hours ahead of the cut-off there. She hit Lone Pine in 41:14 (42-hour limit) and ascended to Whitney Portal with that buckle in mind. She crossed the line in 46:45:59 (a 5:32 half-marathon split)! 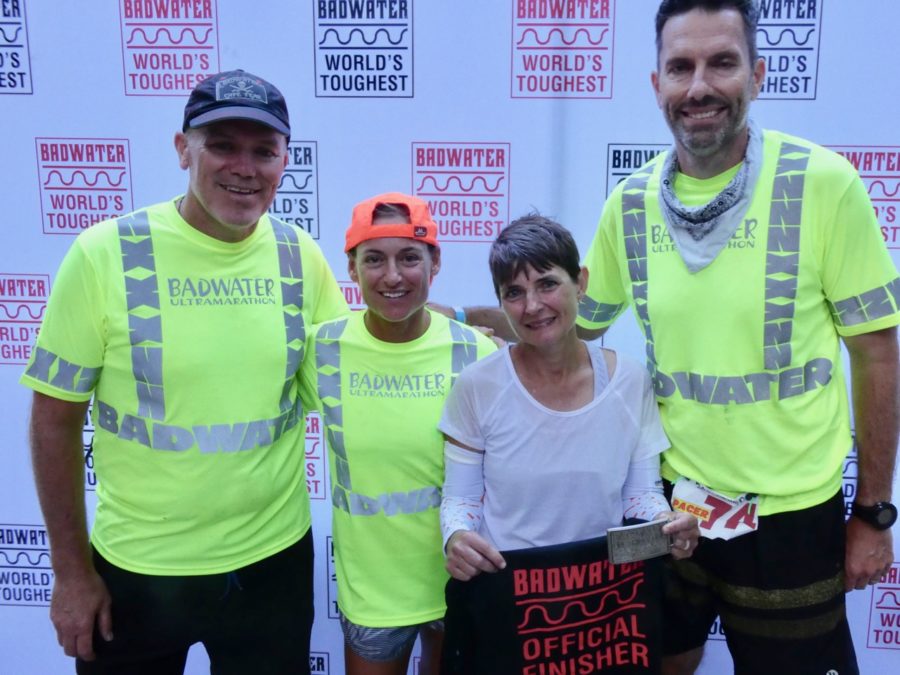 So what do you think? Are those Badwater 135 entrants with no “holy grail of ultra running” yet in their possession simply hungrier to finish than those who have already a buckle? 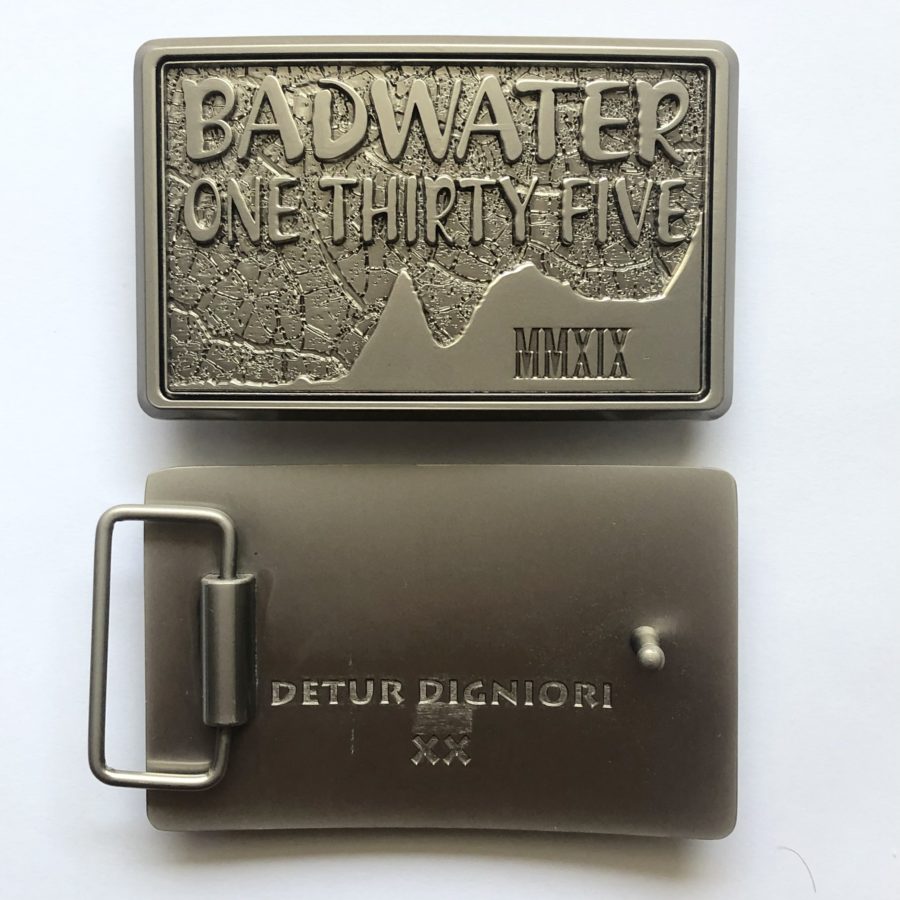 Behold the 2019 edition of the Holy Grail of Ultra Running: Detur Digniori means “Let it be given to those most worthy.” and it truly was given to those 79 runners! (“XX” represents 20 years of AdventureCORPS organizing and Chris Kostman directing the race.)

NOTE: This was posted to the Badwater page on Facebook on August 3, 2019 and received a lot of commentary. You can view that here.